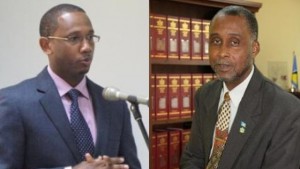 CASTRIES, St Lucia — In a virtual rerun of a threatened lawsuit against a local broadcaster in Saint Lucia in 2013, an attorney representing Claudius Francis, the president of the senate, has written to Clinton Reynolds of MBC Television threatening to institute proceedings for defamation in relation to a newscast on March 30, 2016, suggesting that Prime Minister Dr Kenny Anthony has some house cleaning to do if his government is serious about addressing the growing incidents of rape on the island.

In another example of “if the cap fits, wear it”, attorney Peter Foster has put forward his client Claudius Francis, described as a “renowned insurance broker”, as one of the individuals that could be affected by such suggested house cleaning.

First, on the occasion of International Women’s Day, he said at a public meeting he strongly believes that there are serial rapists on the island and that everything must be done to bring them to justice: Serial rapists on the loose in St Lucia, says PM

However, at least two cases in which currently serving senior government officials were arrested and charged with rape, and neither was “brought to justice” – in each case, the matter was settled “out of court” – have prompted calls for Anthony to clean up his own government.

Opposition United Workers Party (UWP) spokesperson, Nancy Charles said that, if there are any persons whether they be candidates or senior persons within a UWP government who have either been accused or charged with rape, the party will ensure that they can account and they can clear their names before they can serve in any UWP administration.

“We are asking the prime minister to do the same, because we are aware that there are persons within … the current administration, I must say who have either been accused or charged with rape, whether the charges were dropped subsequently… is of no effect, but the point is that there are charges laid against them. So we asking the prime minister to ensure at the end of the day that he makes sure that his Cabinet is clean,” she said.

It is a matter of public record and/or common knowledge in Saint Lucia, that Lorne Theophilus, minister of tourism, heritage and creative industries, and Francis, the chairman of the ruling Saint Lucia Labour party, have both been arrested and charged with rape.

According to Foster, the statements made by Charles and Foster, whether in their natural and ordinary meaning or by innuendo, meant and were understood to mean by persons in Saint Lucia and elsewhere regionally and internationally that Francis is guilty of rape and ought to be removed from his position as president of the Senate and is not fit to hold any high office within the government administration.

However, as was the case of similar threats made almost three years ago on behalf of Francis and Theophilus against local broadcaster Timothy Poleon: Two more St Lucia officials threaten local media, the fact that Francis was not named by either Charles or Reynolds contrasts with extensive online public material that actually names both, all of which was available in 2013 and is still accessible today, with no successful effort having been made by either Francis and Theophilus to have them removed on the grounds of defamation.

On January 29, 2012, a posting on Topix, a community website majority-owned by major international media agencies McClatchy Tribune and Gannett, under the headline “Two St Lucian Gov ministers are violent sexual predator”, names both Francis and Theophilus.

Also on Topix, another posting entitled “A government of criminals!” similarly refers to both Francis and Theophilus by name.

On Slideshare, which is owned by social media giant LinkedIn, a copy of the complainant’s affidavit accusing Theophilus of rape is readily accessible under the heading “The St Lucia Labour Party’s Dark Star” (caution: graphic and explicit contents).

In local media, an article published in the Star newspaper on November 16, 2011, reported that “Theophilus was arrested after he was accused of raping a female colleague at his law offices on Brazil Street, Castries on Saturday January 15th 2005” and is still accessible online.

Likewise, a letter to the editor published in Saint Lucia by the Voice on August 18, 2009, said that “Claudius Francis should only be too aware of these personal issues with the courts during his alleged rape case and his own domestic difficulties.”

Further, an appeal court judgment appearing on the Eastern Caribbean Supreme Court website states (at page 3, para 6), “A complaint was lodged against the respondent, Mr Theophilus, which alleged that he committed the offence of rape.”

As in 2013, it is not clear how much more harm and/or embarrassment Theophilus and/or Francis could have suffered as a result of not being named in the original statements by Reynolds and/or Charles compared to the online material easily accessible to the entire world that actually names them.

Some three years later, it is also not known what steps, if any, Theophilus and/or Francis have taken, in a similar manner to the threats against Poleon in 2013 or the most recent ones against Reynolds, to deal with such explicit reports published online, if indeed they regard such reports as defamatory.

Meanwhile, the threats against Reynolds and Poleon and earlier threats of similar action by another minister, Phillip La Corbiniere, continue to be widely perceived locally and internationally to be an attempt to restrict the right to freedom of expression guaranteed by the constitution of Saint Lucia.

According to one local commentator, this is irreparably undermining the country’s reputation, its economy and security in the hemisphere: “The mere threat of lawsuit is usually sufficient to silence those who express public opposition, and diversity of opinion and free speech seems increasingly regarded by socialist sympathizers as dangerous to the objective of a one party state.”

Since Saint Lucia is already under a cloud, as demonstrated by the suspension of security-related aid by the US based upon human rights abuses, such continued attempts to muzzle the press are doubtless not going to be viewed favourably as and when the government tries to convince the US State Department that it is doing its best to correct such abuses.