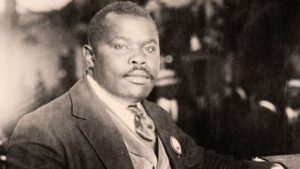 Minister of Culture, Gender, Entertainment and Sport Olivia Grange says the Government is moving to clear National Hero Marcus Garvey of all criminal charges that were laid against him in Jamaica.

She said a Bill is being finalized that is aimed at absolving a number of iconic Jamaicans, including Garvey, of what she described as “acts of liberation”.

The Bill is to be presented to Parliament soon.

“We continue to argue that Garvey’s actions were not criminal, but were acts of liberation with moral justification. The Bill should be brought to the House in October to absolve National Heroes, including Garvey, and other freedom fighters of criminal liabilities arising from their acts of liberation and connected matters. By including Garvey in this Bill, we are moving to ensure that his record will be totally cleared,” the Minister said.

Grange said despite several failed attempts to get Garvey’s name cleared of criminal charges in the United States, the Government remains unrelenting in efforts to achieve that goal.

“As a country, we have done a number of things to honour this great son of Jamaica and to remove the blots against his name….We cannot give up this fight to clear his name,” the Minister emphasized.

Garvey, a proponent of the Black Nationalism and Pan-Africanism movements, founded the Universal Negro Improvement Association (UNIA) in Jamaica in 1914 and then moved two years later to New York where the organization thrived. He spoke across the US and urged African-Americans to be proud of their race and return to Africa, their ancestral homeland.

To facilitate that return to Africa, Garvey founded the Black Star Line in 1919, to provide transportation to Africa, and the Negro Factories Corporation to encourage black economic independence. Three years later, he was arrested for mail fraud in connection with the sale of stock in the Black Star Line, which had by then failed.

Grange also disclosed that Garvey’s legacy will be preserved through the establishment of a museum at 32 Marcus Garvey Way, St Ann’s Bay St Ann, where the National Hero spent his formative years. The current occupants of the earmarked land will be relocated.

The minister said the museum would capture all aspects of the life and times of Garvey. It will be spearheaded by the Jamaica National Heritage Trust, with support from her ministry and other state agencies.

“This development will be supported by public education on the life of young Garvey intertwined with the history of St Ann’s Bay, which will form the backdrop of this transformative man. The boyhood home of the Right Excellent Marcus Garvey will create a live museum with household furniture and other exhibits used during the period Garvey resided there,” Grange said.

The Minister also disclosed that the government of Namibia has advised the Jamaican Government that the main street in that country’s capital, Windhoek, will be renamed in honour of Marcus Garvey, with the ceremony set for later this year.