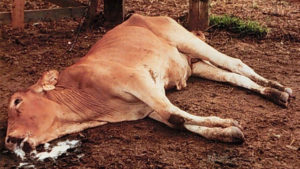 Livestock farmers on St. Kitts continue to lament the loss of their animals to a tick disease, saying the government is not moving fast enough to assist them to save the remainder of their stock.

Farmers reported major losses to their sheep, goat, and cattle livestock a few months ago due to a shortage of the pesticide Bayticol on the island. In August the government was forced to source the controlled substance from different suppliers at an increased cost and limited the amount the farmers could purchase.

One of those farmers, called Peters from the Monkey Hill area, says the Ministry of Agriculture came around with forms asking farmers to list how many animals they had lost which would go before the Cabinet in the hopes of offering them some form of assistance for the financial loss. He claims they have lost more livestock since and have yet to hear back from authorities despite numerous attempts to get an update. The situation has become so dire he claims, that the farmers may stage a protest to get some resolution to their plight.

“No Bayticol was there, no medication, that was the big problem we had with Agriculture. I had over 30 cattle, right now I have about 18. They had a paper giving out for you to put down how many animals you lost. We went up to Agriculture I had lost 11 cattle, 37 sheep and that paper went in a long time ago, but since that I’ve lost 10 more cattle and the same amount of sheep. They said they can’t do anything about that because the form was already submitted. They said the forms would go to Cabinet, that’s all they tell us and up until today no report back from anyone. Nobody knows what they are doing. We are just hearing ‘shoo shoo’ that they will give Bayticol, but at the end of the day giving the farmers Bayticol wont be any help because there will be no animals left to use it on.

“I told the other farmers in Monkey Hill what we need to do is to hold a march; that’s what we are trying to set up, because no one is answering us. We don’t know where we stand.”