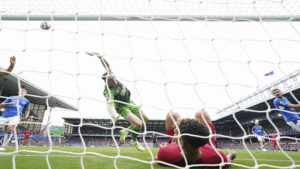 It might be time for Liverpool to start worrying about their slow start to the English Premier League (EPL).

Jurgen Klopp’s team dropped points for the fourth time in six games after an eventful 0-0 draw at Everton in the Merseyside derby on Saturday, with Mohamed Salah hitting the post in the 95th minute.

Chelsea have VAR to thank for not being in a similar position as West Ham had an injury-time equalizer ruled out for a foul at Stamford Bridge, allowing the Blues to hold on for a 2-1 come-from-behind win.

Chelsea already have two losses and a draw in the opening six games, while Liverpool have three draws and one loss, having needed a goal in the eighth minute of injury time to beat Newcastle in midweek.

“It’s not the start we wanted,” Liverpool manager Jurgen Klopp said. “It’s not a dream, it’s exactly 50% of the points available. But that’s the points we got, and let’s go from here. If we go through these really hard moments together we have a good chance to create better moments in the future.”

Tottenham’s start to the league have been more impressive, and Antonio Conte’s team remained unbeaten after beating Fulham 2-1 at home in another London derby, with Harry Kane scoring his fifth goal of the season.

In the highest-scoring game of the day, Ivan Toney had a hat trick for Brentford in a 5-2 win over Leeds, whose American manager Jesse Marsch was sent off in the second half for protesting a refereeing decision.

Bournemouth came from 2-0 down in the second half to earn a 3-2 away win at Nottingham Forest in a game between promoted sides, while Wolverhampton earned their first victory of the season by beating Southampton 1-0.

Newcastle missed a host of chances as they were held at home by Crystal Palace to 0-0.