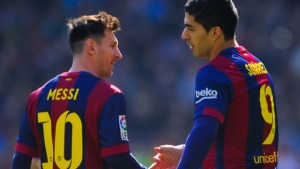 (CNN)Real Madrid’s star-studded attacking force might be struggling to fire, but Barcelona coach Luis Enrique has no such problems with his wealth of talent up front.

Sunday’s 6-1 demolition of Rayo Vallecano put the Catalan side one point above Real at the top of Spain’s La Liga, with Lionel Messi setting more records as he netted a hat-trick while fellow forward Luis Suarez also scored twice.

Even without suspended Brazil star Neymar — the third prong of Barca’s striking line — Enrique was able to happily reflect on a result that fully rubbed salt in Madrid wounds following Saturday’s 1-0 defeat at Athletic Bilbao.

“We’re elated, but the objective is to be leading at the end of the season. I already said that everybody could lose a game, so we have to keep playing well and win every match,” he said.

“It’s heavy having to win every single match. Each game is more important than the last.”

“There is no link-up play, our play is too based around individual play, we need another way of attacking, with faster play and fewer touches,” said the Italian, who must rouse his troops for Tuesday’s European Champions League last-16, second-leg tie at home to Schalke.

“It is quite confusing to see what we’re doing at the moment in attack. The ball doesn’t move around quickly.”

While Real’s front trio of top scorer Cristiano Ronaldo, Karim Benzema and Gareth Bale are struggling to match their form from the first half of this season, Barca’s star men are moving into menacing mode ahead of the rival teams’ “El Clasico” clash at the Nou Camp in a fortnight.

Messi’s 32nd career hat-trick is a record for a Spanish club player, and took him past Ronaldo as the La Liga leader on 24 trebles.

The Argentina star also drew level with the Portugal captain as the Spanish league’s top scorer this season on 30 goals.

It’s the sixth successive season in which he has topped 40 goals, with 41 from 38 games so far this campaign.

Suarez has now scored six goals in his last four games, and 13 from 26 overall appearances since joining from English club Liverpool after a World Cup that ended in a lengthy ban for his bite on Italy’s Giorgio Chiellini.

“Suarez and Messi are having more and more chemistry, and today we all saw what they bring to the team,” Enrique said.

“I like (Ivan) Rakitic wherever he plays on the field. He always knows what to do with the ball and is one of the best signings we’ve ever had.”

“(Gerard) Piqué has always known how to score, above all on set plays. It’s a perfect solution for games when our opponents collapse defensively.”

Both teams had a player sent off in front of a crowd of over 87,000, Barca’s best this season: Rayo defender Tito for a foul on Suarez in the 55th minute that allowed Messi to make it 3-0 with a retaken penalty; and Dani Alves for tripping Alberto Bueno, who also netted the resulting spot-kick.

In Italy, second-placed Roma missed a chance to put pressure on leader Juventus after being held 0-0 at struggling Chievo Verona on Sunday.

In Germany, Bayer Leverkusen moved up to fourth with a 3-0 win at Paderborn as South Korea striker Heung-Min Son scored two late goals after a 73rd-minute opener from Greece defender Kyriakos Papadopoulos.

In France, Lyon restored a one-point lead at the top of the table with a 5-1 win at Montpellier, as young midfielder Nabil Fekir scored twice.

In England, Premier League side Liverpool faces an FA Cup replay after being held 0-0 by second-tier Blackburn.