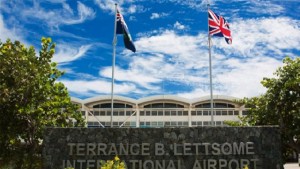 The incident took place at the Terrance B. Lettsome International Airport in Tortola.

ST. JOHN’S, Antigua, September 22, 2015 – LIAT has confirmed it has suspended one of its employees and launched an investigation into an alleged fight between the female worker and a customer in Tortola last week.

The Antigua-based carrier said it began the probe immediately after being informed about the incident at the Terrance B. Lettsome International Airport on September 18.

“The employee in question has been suspended pending the outcome of the investigation.
LIAT is committed to clearly, openly, and completely establish all of the facts surrounding the incident and to a fair resolution of the matter,” it said in a brief statement issued yesterday.

The press release gave no details about the incident.

However, media reports out of the British Virgin Islands, where police are also carrying out investigations, stated that the female customer went to the airport after 8:30 p.m. for a flight to San Juan, Puerto Rico and after waiting for two hours asked the LIAT agent for information.

According to the reports, when the airline worker told the passenger that the flight had already left, a heated argument ensued and the confrontation subsequently got physical.

The customer was treated at the hospital for injuries sustained during the altercation, and then released.