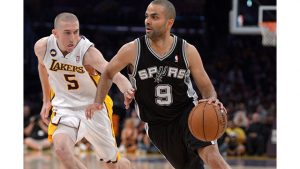 LOS ANGELES — With the Los Angeles Lakers in the middle of their latest franchise upheaval, the San Antonio Spurs showed their young opponents what steady excellence looks like.

Pau Gasol added 15 points against his former team, which has lost four straight and 15 of 19. Five days ago, Lakers owner Jeanie Buss fired her top two basketball executives, including her brother, and put Johnson in charge.

Gasol left the Lakers as a free agent three years ago at the start of their descent into the worst four-season stretch in franchise history. After his stormy history with Hollywood’s favorite team, Gasol has a special appreciation for the drama-free winning environment created by Gregg Popovich, R.C. Buford and the Spurs.

“The Spurs’ record and trajectory over the last 19 seasons speaks for itself,” Gasol said. “It’s just a model of consistency, excellency and how to get it done. The way they build the culture around here is really impressive. I’m just glad to be a part of it, and now let’s see if we can do something special.”

LaMarcus Aldridge had 16 points for the Spurs, who wrapped up their eight-game road trip with six victories. San Antonio has won four straight and nine of 11 overall, steadily cruising toward a Southwest Division title and another playoff run in six weeks.

Spurs: Gasol played 20 minutes in his second game back from a 15-game absence with a broken left hand. Gasol, who won two NBA titles in Los Angeles, got a warm ovation from Lakers fans. … USC product Dewayne Dedmon had 11 points and nine rebounds. The Spurs’ unlikely starting big man is another product of LA’s far-flung suburbs, growing up in Lancaster.

Lakers: Kareem Abdul-Jabbar received a standing ovation at halftime when the Lakers honored him for his social activism. … The game was just the Lakers’ second home game in February and their third home game in five weeks. After playing eight of their previous 10 on the road, they began a four-game homestand.

Rookie Brandon Ingram scored a season-high 22 points as the Lakers fell to 19-41, ensuring their fourth consecutive non-winning season. Coach Luke Walton was dismayed by his young roster’s effort while falling behind by 21 points in the first half, calling it “unacceptable.”

“I don’t know if it was the early start or what,” Walton said. “I love our guys and I’m supportive toward them, and I think they did a good job in the second half. But that first half, that can’t happen if we’re trying to build and trying to get somewhere.”

Jordan Clarkson scored 19 points and D’Angelo Russell had 18 for the Lakers, who have lost their first two games since Buss dismissed general manager Mitch Kupchak and her brother, Jim.

Johnson made no pregame speech to the Staples Center fans who have watched the worst four years in franchise history. Jeanie Buss watched the game from her usual spot in the second row, while Kupchak’s normal seats were empty.

One more defeat will clinch the Lakers’ longest stretch of losing seasons since 1961, the former Minneapolis Lakers’ first year on the West Coast.

The Spurs have won eight straight over the Lakers, surpassing their 2004-06 run for their longest winning streak in the series between these longtime Western Conference rivals. San Antonio also has beaten the Lakers seven straight times at Staples Center.

Leonard, who grew up 60 miles east of Staples Center in Moreno Valley, scored 19 points in the first half.

“We just stayed focused from the start of the game about defending them well,” Leonard said.

In the Lakers’ first home game since trading leading scorer Lou Williams to Houston for a draft pick, Clarkson excelled off the bench in Williams’ usual spot as the second unit’s offensive fuel.

Check out the team sites for the San Antonio Spurs and the Los Angeles Lakers for more game coverage.