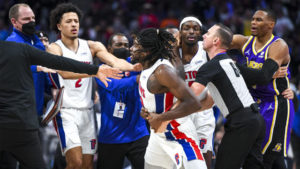 DETROIT — Los Angeles Lakers star LeBron James was ejected after what appeared to be his fist and elbow connected with Detroit Pistons center Isaiah Stewart, beginning an altercation that took a few minutes to calm down after Stewart charged James.

The two got tangled up on a free throw in the third quarter before James dislodged his fist into Stewart’s face, drawing blood. Stewart, a second-year center, got in James’ face in the aftermath before players on both sides had to be separated.

Stewart charged at James again, shedding teammates and team security but the two never engaged after. Whether James meant to connect with Stewart was immaterial to the center, who clearly didn’t appreciate the contact and his bloody face was evidence enough.

Order restored pretty quickly and there was no extra activities, although Carmelo Anthony was having words with a fan in the interim.

James was ejected following the officials’ review, deeming his actions a flagrant 2 foul. It was James’ second career ejection. Stewart also was ejected after two technical fouls. He also needed five stitches, according to the team.

After the game, crew chief Scott Foster explained in a pool report James’ ejection was for “unnecessary and excessive contact above the shoulder” and Stewart’s two techs were “for multiple unsportsmanlike acts during the altercation.”

Russell Westbrook received a technical after review and was surprised to learn of it.

“I got a tech? Oh, wow. Why’d I get a tech? I didn’t know I had a tech. Wow. That’s interesting,” Westbrook said. “Well, you know, that’s just being Russell, I guess. When you’re Russell Westbrook, they just try to do anything, but whatever. I don’t know what I did, but whatever, they had to put it on somebody.”

“[Stewart] got cut above the eye. It wasn’t on purpose. We wasn’t gonna allow him to keep charging [James],” said Anthony Davis, who scored 30 points and had 10 rebounds.

The immediate aftermath and ejections suggest that suspensions will follow. There has been one suspension for an on-court incident so far this season. Denver’s Nikola Jokic was suspended one game for pushing Miami’s Markieff Morris from behind.

Detroit coach Dwane Casey said he didn’t think the incident would result in a suspension for Stewart.