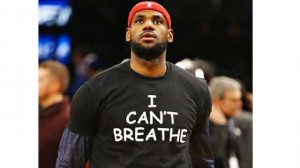 BROOKLYN — Several players on both the Cleveland Cavaliers and Brooklyn Nets, including LeBron James, Kevin Garnett, Kyrie Irving and Deron Williams, wore black “I Can’t Breathe” T-shirts during pregame warm-ups Monday, following in the footsteps of Chicago Bulls guard Derrick Rose who wore the same shirt in a game Saturday to show support for the family of Eric Garner.

“It’s not a Cavs thing,” James said before the game. “It’s a worldly thing.”

On several occasions in the past couple weeks, James has spoken out about the deaths of Mike Brown in Ferguson, Missouri, and Tamir Rice in Cleveland. Like Garner, Brown and Rice were both African-American males that died because of a confrontation with a police officer.

“It’s just for us to make a [statement] to understand what we’re going through as a society,” James said when asked about the T-shirt. “I’ve been quoted over and over about what’s going on as far as it’s more of a notion to the family, more than anything. Obviously, as a society we have to do better. We have to be better for one another. It doesn’t matter what race you are. It’s more of a shout out to the family more than anything, because they’re the ones that should be getting all the energy and effort.”

James told reporters on Sunday he was “looking for” a T-shirt like the one Rose wore. Nets guard Jarrett Jack heard James’ comments and supplied the shirts for players on both teams to wear.

Before the game, Jack, who played for Cleveland last season, told reporters he offered the T-shirts to members of the Cavs.

“I just heard people’s opinion on the topic, and I know [the Cavaliers] are on the road, this is the place where it happened, so if they wanted to be a part of the cause or make a statement without actually necessarily saying any words, I definitely extended the invitation,” Jack said.

“Obviously Kyrie was my teammate, so I reached out to him, I heard ‘Bron say something about it when Derrick Rose took the stance on it, so I reached out to my people out here, Excel Sports Management [Jack’s agency], they was able to make it happen, they made a few shirts for those guys happen over there, so I know us as a team we’re gonna go out and try to make a stance and show that we’re a team that’s not with prejudice. We want to have tolerance for everybody. And I just want to allow those guys to come be a part of it as well as much as we could.”

“I try to kinda distance myself from [social issues],” but this is one where I kinda really paid attention and saw what was going on,” Williams said. “I mean, you can see the [Garner] video and you know what happened. It’s not one of those things where people are saying this and the cops are saying that. It’s there for you to see. You just feel bad that a man lost his life because of that.”

James echoed this sentiment, saying after the Cavaliers’ 110-88 victory, “It was a message to the family. That I’m sorry for their loss, sorry to his wife. That’s what it’s about.

“I think everybody else gets caught up in everything else besides who’s really feeling it, and that’s the family. That’s what it’s about.”

The statement from the players came before a game that was attended by Britain’s Prince William and his wife, Kate, as well as NBA Commissioner Adam Silver.

“I respect Derrick Rose and all of our players for voicing their personal views on important issues but my preference would be for players to abide by our on-court attire rules,” Silver said.

Players are required to wear attire of Adidas, the league’s official apparel provider, but a league source told ESPN’s Jeremy Schaap that the NBA will not fine players who wore the shirts in warmups.

Brooklyn small forward Alan Anderson and Jack also wore the shirts during warm-ups. Jay Z, a New York native who once had an ownership stake in the Nets, supplied Brooklyn with their shirts.

“You hear the slogan ‘NBA cares’ and it’s more evident than now to show some support,” Garnett said. “Obviously we’re not on the front line of this movement, but I think it’s important being from these communities and supporting these communities.”

Outside Barclays Center, a couple hundred protestors chanted and participated in a “die-in” in front of the main entrance to the arena as members of the NYPD looked on and helped secure the area.

At 7 p.m. ET the protestors laid down in front of the main entrance to the arena for about 10 minutes.

“It’s bigger than all of us,” added Irving. “We have to take a stand together. It’s truly important that we do.”

Nets coach Lionel Hollins and Cavs coach Dave Blatt both were in in favor of their players taking a public stand.

“They should be political. They should be about social awareness. Basketball is just a small part of life,” Hollins said. “If they don’t think that there is justice or they feel like there is something that they should protest, then they should. That is their right as citizens of America, and I have no problem with it at all.”