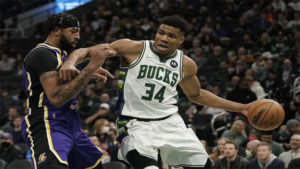 MILWAUKEE — The Lakers began their five-game trip unable to deal with the force of Milwaukee’s brilliant Giannis Antetokounmpo.
Antetokounmpo was the most powerful player on the Fiserv Forum court Wednesday night, doing as he pleased in torching the Lakers with 47 points during the Bucks’ 109-102 win.

The Lakers tried to counter with Talen Horton-Tucker, who in his third game back from thumb surgery and as a starter was strong again with 25 points and 12 rebounds.

They got an efficient game from Russell Westbrook, who had 19 points on seven-for-16 shooting and 15 assists.

They got a solid game from Anthony Davis, who had 18 points and nine rebounds.

But the man of the night was Antetokounmpo. He was 18 for 23 shooting from the field, including three for four from three-point range. He was eight for 11 from the free-throw line.

“Yeah, I think he was three for four from three tonight. We want him shooting that three ball,” Davis said. “He’s gotten better at the midrange and the turnarounds, but we want him shooting the three. And everyone against the Lakers makes their threes. We know he’s been working on it, but that’s a shot we’re living with. … But he’s a hell of a player. And a lot of his shots were in the paint, most of them. But he was hitting some big-time shots, kind of keeping us honest.”

When the Lakers tried to make their move in the fourth quarter, each time Antetokounmpo made a play to keep them at bay.

He had three consecutive three-point plays, ending any hope the Lakers had of coming back.

“He’s as tough as it gets in terms of trying to contain someone,” Lakers coach Frank Vogel said of Antetokounmpo.

Vogel expressed his displeasure over his star, Davis, not getting a free-throw attempt.

Vogel was especially unhappy when Davis dunked the ball and appeared to have been fouled by Antetokounmpo but no foul was called.

“I think Anthony Davis getting zero free-throw attempts is something that’s a little bit mind-boggling,” Vogel said. “And we continue to communicate with the league on that.”

Horton-Tucker has been impressive in his three games, dropping in 17 in his season debut, a career-high 28 in his second game and now a 25-point outing.

When LeBron James does return from injury, Vogel was asked, has Horton-Tucker made a strong enough case to remain a starter?

“Yes, the short answer,” Vogel said. “Yes, that’s not to say when Bron comes back and we’re whole, I haven’t made a decision about what that hopefully is going to look like. Sometimes scoring off the bench is what you need.

Trying to figure out who the Lakers are at 8-8 is difficult.

James, who has been working out enough to leave the Lakers optimistic about his return, remains out because of an abdominal strain.

Kendrick Nunn (right knee bone bruise), Austin Reaves (hamstring) and Trevor Ariza (right ankle), all of whom are expected to have roles, are out.

Davis, who took a knee to his hip but came back to play, said, “yes and no,” when asked whether he could evaluate who the Lakers are with so many talented players down.

“We just gotta continue to fight until we get everybody back,” said Davis, who played 37 minutes, second only to Horton-Tucker’s 39. “But we still have guys who’s able to win basketball games for us.

“I’d say we played a pretty good game tonight. We just didn’t make some shots toward the end but, once we get everybody back, we