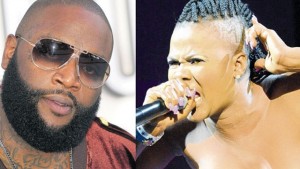 THE organisers of Reggae Sumfest are not worried about Wednesday’s arrest of hip-hop star Rick Ross, who is one of the headliners on this year’s festival.

Sumfest Chairman Johnny Gourzong told Splash that he has been assured that the American artiste will definitely honour his July 17 commitment in Jamaica.

“We are not losing any sleep over this matter right now, as we have been assured by his team that he will be in Jamaica. I spoke to his manager and the artiste will appear before a judge today (Thursday) and so we wait to see what will come of that. He is set to appear at the BET Awards this weekend, so we’ll be watching closely. But we are not worried based on the assurances we have received from his team,” Gourzong explained.

He was speaking following the launch of Reggae Sumfest, which is scheduled for July 12-18 in Montego Bay.

Rick Ross was arrested on charges of kidnapping, aggravated assault and aggravated battery stemming from a June 7 attack on a man. It is said the entertainer also used a Glock handgun to strike the man. The attack, which took place at Rick Ross’ Atlanta mansion, is said to have left the man with injuries including two chipped teeth and a neck injury.

Meanwhile, history will be created this year as for the first time on a major reggae festival a female artiste is set to close the show.

Perennial favourite Lady Saw will close the dancehall night of the festival on Thursday, July 16.

Gourzong further explained that this was a no-brainer.

“Lady Saw has been with us since year one. It was we who crowned her Queen of the Dancehall and over the years she has become a staple on dancehall night. She is more than capable of bringing the curtains down on the event and, therefore, we said why not. Furthermore, we realised we would be creating history as no major event… no Sting, no Sunsplash, none has ever used a female act to close the show. So we are looking forward to something really great.”

Gourzong and his team have also drawn on the King of the Dancehall — Beenie Man — to close Saturday night and, by extension, the entire festival.

“Beenie again is such a performer. Like Lady Saw, he has been with us for years. We have no doubt that our patrons will stay behind to see his set, and we are sure he will put on a show. We are hoping that the King of the Dancehall will join the Queen of the Dancehall during her performance on Thursday night and she will join him when he closes the festival on Saturday night,” he said.

Meanwhile, the organisers of the event unveiled the full line-up for the three days of concerts. Among the acts billed for dancehall night are Spice, I-Octane, Popcaan, Aidonia, Capleton, Tommy Lee Sparta, Demarco, Dexta Daps, Ishawna, Bugle and Gully Bop.

The closing night has been dubbed Summer Blockbuster by the event’s planners due to the fact that a number of the acts have appeared in films and on television. The night’s leading lady is Grammy and Academy Award winner Jennifer Hudson. The ‘supporting cast’ includes rapper Yazz from the hit TV show Empire and Christopher Martin, who made his film debut in Jeremy Whittaker’s Destiny.