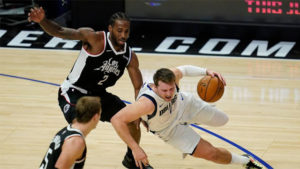 The Dallas Mavericks were a team built to lose in the first round of the NBA playoffs, and they succeeded.

They are a nice little team with a top 10 NBA talent, whose season was again popped by the LA Clippers.

The Mavs are no closer to being NBA title contenders today than they were when the 2020 postseason ended.

They are not advancing any further than the first round until they play some defense, acquire some real reliable help for Luka Doncic, who will soon learn he can’t do this alone.

He will have one year remaining on his rookie contract, and there will be round-the-clock speculation on whether he’s happy here.

Mavs owner Mark Cuban will have to make difficult decisions with people he likes, but that does not include head coach Rick Carlisle.

It has been 10 years since the Mavs last won a playoff series, and at some point the head coach is accountable, even if it’s not his job to box out or make free throws.

On Sunday, after the Mavs’ season ended in a 126-111 Game 7 loss to the Clippers, I asked Carlisle why after a string of six playoff series losses over 10 years he’s right guy to lead this franchise into the future.

“That’s a question you have to ask Mark [Cuban],” Carlisle said Sunday. “I obviously do. I’d text him and see what he has to say about it.”

Cuban told ESPN, “Let me tell you how I look at coaching. You don’t make a change to make a change. Unless you have someone that you know is much, much, much better, the grass is rarely greener on the other side.”

Carlisle is not some softy, but his team is.

So dumping Carlisle is not a viable solution, but “keeping the powder dry” ain’t gonna sell seats, or win another playoff game — much less a series in the Western Conference.

After winning three road games against the Clippers in these playoffs, a fourth was too much to ask. The Mavs blew it when they were unable to close out this series in Game 6 at home in Dallas on Friday night.

In Sunday’s Game 7, the Mavs had a third-quarter burst before collapsing to what is now LA’s best NBA team.

Once again, Luka Doncic put up astounding numbers — 46 points and 14 assists — as he did all series but … who cares? They lost.

In winning Game 7, the Clippers became the first team to actually win a home game in this series.

Rather than celebrate the Mavs’ first playoff series win since winning the 2011 NBA Finals, the summer starts now.

“We were up 2-0 and we all felt like we were going to win this series,” Mavs guard Dorian Finney-Smith said Sunday. “We just couldn’t win at home.”

This was as close as they have been to winning a series in a decade. The outcome is the same because, in this loaded NBA, they are still just a one-and-done roster.

The coach is fine. It’s the players.

In the third quarter, it actually looked like the Mavs were actually going to win a Game 7 on the road for the second time in franchise history.

And then the Clippers closed the quarter with a 24-4 run. The Mavs cut it to seven with two minutes remaining, but that was it.

“We gave everything. I hate losing but I’m proud of my team,” Doncic said.

This game was decided not on Sunday, but rather during the previous offseason.

The Mavs tinkered when the roster needed an HGH shot. Keeping Willie Cauley-Stein and Trey Burke, and then bringing in James Johnson and Josh Richardson, was never going to do much.

The same for adding veteran J.J. Redick, who was basically a nothing since a midseason trade because of injuries.

As evidenced in Games 6 and 7 of this series, the players surrounding Luka aren’t quite good enough to close out a decent team.

The Mavs don’t need fine. They need another bleep-kicker.

That should be Kristaps Porzingis. In this series, Porzingis was, at best, erratic to non-existent.

The Mavericks will have to determine this summer if KP is a problem, or a solution. Currently, he’s an issue.

They have a nice team with a lot of nice guys, who put together a nice season. And they’re about to take a nice vacation.

Because that’s the team the Dallas Mavericks built.

No. 4 Los Angeles Clippers vs. No. 5 Dallas Mavericks