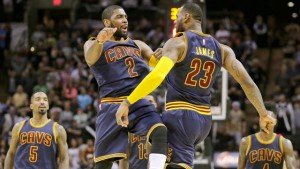 The guard collected a career-high and NBA season-high 57 points, and his fadeaway 3 sent Thursday night’s emotional game into overtime, where Cleveland rallied for a 128-125 victory over the defending NBA champion San Antonio Spurs.

“The kid is special; we all know it, we all see it,” James said. “For him to go out and put on a performance like he did tonight was incredible.”

Irving’s 57 topped his own NBA-best 55-point game against Portland on Jan. 28. He scored nine points in the final minute of regulation to tie the game and added 11 more in overtime to snap San Antonio’s six-game winning streak.

“A few of those shots, it just left my hands and I kind of threw them up at the rim and I was lucky enough and blessed enough that they went in,” Irving said.

His point total was a Cavs record, too, topping James’ 56 against the Raptors in 2005.

James was back just in time from a one-game absence to be part of Irving’s stellar night in what everyone said was one of the best NBA games this season.

“It was such a fun game,” Irving said. “The crowd was into it. They sold out, they came to see a great game and it was. Once Bron gets into those step-back 3s, we were just looking at each other, ‘Man, this is just so much fun.'”

Irving hit a 3-pointer in the face of heavy defense from Danny Green to pull Cleveland to 110-107 with 31 seconds remaining in regulation. After the Spurs’ Kawhi Leonard missed two free throws with 4.3 seconds left, Irving made his 3, falling to his right over Leonard to tie it at 110.

“I know I lost the game,” Leonard said, “but (missing free throws) happens to everybody. So, I’ve got to keep moving forward and know that I made big free throws and big shots before.”

Irving made all seven of his 3-point attempts, was 20 of 32 from the field overall, and made 10 free throws without a miss.

“He was outstanding every time we had an opportunity to beat them,” Spurs star Manu Ginobili said. “He came up with crazy plays.”

James added 31 in his first game at the AT&T Center since being blown out in five games by San Antonio in the NBA Finals in his last games with the Miami Heat.

He was 10 for 20 from the floor in a physical battle with Leonard, but it was lessened by Irving’s wild night.

Irving scored 11 points in overtime, including a crossover, fadeaway 3-pointer against Boris Diaw with 1:20 remaining to give Cleveland a 122-118 lead.

Green’s 3-pointer gave San Antonio a 104-95 lead in regulation, prompting a timeout by Cleveland and a technical on James for arguing a non-call on an earlier miss.

“We just try to regain my composure, including myself, which we did,” James said. “We had to get some timely shots and some timely stops.”

It was part of an emotional night for James. He and Leonard battled on both ends of the court, with King James nodding his head and Leonard staring at him defiantly after the two exchanged a series of elbows to the chest and pushes away from the ball early in the second quarter.

Cavaliers: F Shawn Marion (left hip strain) did not play but was working out at full speed about 10 minutes before the game. … The Cavaliers are 18-16 on the road. … Cleveland was 12-1 in its previous 13 games against Western Conference teams, outscoring those opponents by 11.2 points. … The Cavs are 34-5 when scoring at least 100 points. … Tristan Thompson had four offensive rebounds in becoming the ninth player in team history with 1,000 career offensive rebounds.

Spurs: Ginobili played even though he is still battling gastroenteritis that kept him out of San Antonio’s previous game. Ginobili told the team he was OK to play after participating in warmups prior to the game. He finished with no points and just one field goal attempt in 10 minutes. … The Spurs are 24-8 at home this season. … Duncan, Parker and Ginobili have 718 career wins, leaving them within 11 of tying Boston’s Larry Bird, Kevin McHale and Robert Parish for the most victories by a trio of teammates.