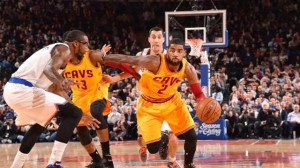 NEW YORK — Kyrie Irving looked ready to slam the ball down in frustration, angry his coach had stopped him when the Knicks couldn’t.

Everything worked out during that timeout Irving didn’t want. David Blatt put the ball right back in his point guard’s hands, and Irving delivered one last time.

Irving scored a season-high 37 points, including a teardrop layup with 10 seconds left, and the Cleveland Cavaliers beat New York 90-87 on Thursday night for their season-best fifth straight victory.

“I saw something different out there, but that’s just part of the game,” Irving said of his reaction to Blatt’s timeout. “He called timeout, drew up a heck of a play, trusted me with the ball at the end of the game, and we’re getting used to one another.”

Irving carried the Cavs most of the game before LeBron James had five straight points late that helped Cleveland pull it out. James finished with 19 points and 12 assists, content to be a passer most of the night because of Irving’s play.

Carmelo Anthony ended a 4-for-19 night by missing a 3-pointer in the final seconds as the Knicks dropped their sixth straight and fell to 4-16.

“For the most part I thought everybody played extremely well tonight,” Anthony said. “I wish I played better. I know I could have played a little bit better. I just wasn’t there for my team offensively tonight.”

Tim Hardaway Jr. added 20 points and Amar’e Stoudemire had 18 points and nine rebounds for the Knicks, who were trying to surprise the Cavs for the second time this season.

But New York, which spoiled James’ first game back in Cleveland with a 95-90 victory on Oct. 30, couldn’t hold on after leading by seven in the final quarter.

James nailed his lone 3-pointer in six attempts for an 86-85 lead with 3:54 left, then helped force a turnover and turned it into a fast-break dunk for a three-point lead with 3:25 to go.

Stoudemire’s basket cut it to 88-87, and the teams traded misses until Cleveland had the ball with under a half-minute left and Irving dribbling in the frontcourt. He said he saw a lane to the right and only 9 seconds left on the shot clock, but Blatt saw something else.

“Well, Kyrie is doing a lot better when he’s playing than when he’s coaching,” Blatt joked.

Irving then made a lefty layup, saying later he trusted Blatt “100 percent.”

Kevin Love had 11 points and 11 rebounds for the Cavs, who had averaged 109.8 points in the previous four victories but could never get their offense going in this one — except for Irving.

He finished 12 of 18 from the field and bettered the 29 points per game he was scoring at Madison Square Garden, which was his best at any arena.

Cavaliers: Irving has scored 20 or more points in 10 straight games against the Knicks. … Blatt was asked if he could learn anything by watching the first matchup, which was his first game as an NBA coach. “When I feel like being particularly masochistic, I go back and look at that game, yeah,” he said. “Given my experience, I try to avoid that whenever I can.”

Knicks: The Knicks changed their starting lineup again, with Quincy Acy starting at forward and Stoudemire moving to center. Coach Derek Fisher said Acy, who scored a career-high 15 points, had some of the necessary skills to defend Love. … Fisher walked all the way to the logo near center court to call a late timeout after he tried and failed to get one granted in the previous game. … J.R. Smith was back after missing the last game and almost all the previous one with flu-like symptoms.

James was bothered during the game by right elbow pain, a problem he had experienced in the past, but said he would be OK. “A little sore tonight,” he said. “I don’t know why, it hasn’t been sore for a while, but I’ll be all right tomorrow.”

Cavaliers: At Toronto on Friday.

Knicks: At Charlotte on Friday.