Kyrie Irving reportedly not talking to anyone from Cavaliers organization 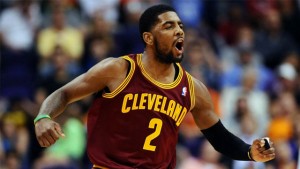 It’s been 20 days since Kyrie Irving explicated his discontent and requested a trade at a meeting with Cleveland Cavaliers owner Dan Gilbert. In three subsequent weeks, the Cavs have been exploring their options. One of those options is to trade Irving. Another is to try to get Irving in a room with LeBron James, coach Ty Lue and others to smooth over differences, mend relationships and make another run at a title.

But there’s a problem with the latter approach: The Cavs reportedly can’t even get in touch with Kyrie.

That’s according to The Athletic’s Jason Lloyd, who, citing multiple sources, wrote that Irving has been “unreachable”:

The Cavs have unsuccessfully tried to contact Irving, multiple sources with knowledge of the situation told The Athletic, but he is not talking to anyone from the organization.

Irving had been out of the country, on a tour of Asia with Nike that concluded with a stop in China. But it’s not like he’s been off the grid. His trip has been documented on social media.

Irving then posted a Snapchat video of himself singing “I’m Coming Home” as he returned to the U.S.

But apparently nobody from the Cavs can get a hold of him.

The Cavs addressed the Irving situation — kind of — at a news conference Wednesday, and new general manager Koby Altman said he and the team “had dialogue with [Irving’s] representation.”

Altman called it a “fluid situation.” But the lack of specificity at the news conference, coupled with Lloyd’s reports, is somewhat ominous for the Cavs.

It’s not entirely unheard of for a player to not keep in touch with his team’s front office over the summer, especially if he’s abroad. But if Cavs personnel have tried to contact Irving and have come up empty, that’s not a great sign