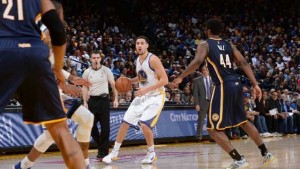 OAKLAND, Calif. — Most wins have come easy for the Golden State Warriors. The latest victory did not.

And that’s why coach Steve Kerr called it one of his favorites this season.

Klay Thompson scored 27 of his 40 points in the second half, and the Warriors shook off a slow start to put away the pesky Indiana Pacers 117-102 on Wednesday night for their fifth straight win.

“We were tested,” Kerr said. “We had to figure a lot of things out as we went, and I thought the players did a great job of kind of just doing some things on their own and sorting through the game.”

The Pacers pulled ahead by 11 points early and gave Golden State a rare fight despite center Roy Hibbert limping off with a sprained left ankle in the first quarter. The Warriors roared back to tie it at 50 at the half, opened the third quarter on a 14-1 run and made the game look easier than it really was with the final margin.

It had been quite a while since the NBA-leading Warriors (28-5) faced such a challenge, especially at home, where they have won 13 in a row. They had won the previous four games of their current winning streak by an average of 25 points.

Thompson made 14 of 25 shots, including six of 11 from 3-point range, and Stephen Curry added 21 points and a season-high-tying 15 assists to anchor Golden State’s late surge.

“We got a lot of good looks on the break in the second half, and that’s why we broke it open,” Thompson said.

Solomon Hill scored 21 points and David West had 16 for the Pacers, who are dealing with another injury in a season already full of them.

Hibbert was helped to the locker room after landing awkwardly going for a rebound. He rejoined Indiana’s bench in the second half but moved gingerly any time he got up.

Hibbert missed four games earlier this season after spraining the same ankle in a Nov. 22 loss to Phoenix but said it wasn’t as bad this time. Coach Frank Vogel said after the game that he didn’t know the severity of the sprain and that Hibbert is day to day.

Vogel also said he was proud of how his team handled the adversity.

“I’m satisfied with our effort for most of the game. I like the way we’re playing. We’re sharing the basketball, playing hard, and I like our physicality,” Vogel said.

While the Pacers lost their big man in the middle, the Warriors got theirs back.

Andrew Bogut, who missed the previous 12 games with a right knee injury, entered in the first quarter. The 7-foot center got a big round of applause from fans, and finished with four points and eight rebounds in 15 minutes.

But it was Thompson’s streaky stroke that carried the Warriors when they needed it most.

He teamed with Curry to erase the deficit with a big burst at the end of the second quarter and another to open the third that put the Warriors in control. Thompson nearly eclipsed his career best of 41 points, which came in a win over the Los Angeles Lakers on Nov. 1.

Warriors: Curry became the fastest player in NBA history to make 1,000 career 3-pointers. It was Curry’s 369th game, which is 88 fewer than it took Dennis Scott (457 games) to reach the milestone. … Backup center Festus Ezeli sat out for the sixth straight game with a sprained left ankle.

Vogel said injured Pacers star Paul George is doing some light jogging and shooting drills, but the team still does not expect him to play this season. George broke his right leg in a gruesome injury that occurred after running into a basketball stanchion during an intrasquad scrimmage for Team USA in Las Vegas on Aug. 1.