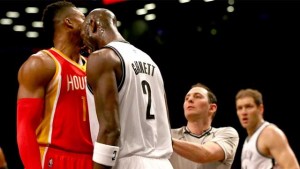 Dwight Howard’s face might have been stinging from Kevin Garnett ramming his head into it, and now his ears were ringing as fans directed loud boos toward him.

Howard wasn’t tempted to silence them by demanding the ball at the expense of Houston’s offense. He was after a win, not revenge.

“As long as we win the game, that’s all that matters,” Howard said. “We’ve got 82 games and the playoffs. I’ll do my damage when it’s time.”

James Harden scored 30 points, carrying Houston on a night when Howard did little after fighting with Garnett, and the Rockets beat the slumping Brooklyn Nets 113-99 on Monday.

Garnett was ejected in the first quarter after head-butting Howard in the face and throwing the ball at him, while Howard received a technical foul after appearing to punch or slap Garnett in the neck.

Howard finished with eight points and five rebounds, but the Rockets didn’t need much in the middle while dominating from the outside with 16 3-pointers in 40 attempts.

The only time they really were stopped is when referees halted the action to review video of the scuffle.

“I think we’ve been locked in these last few games and so a little hesitation wasn’t going to stop us from our goal, and that was to win the game,” Harden said.

Mason Plumlee scored a career-high 24 points for the Nets, who lost their sixth straight.

“Kevin did a lot for us, got us going,” Plumlee said of Garnett, who didn’t speak to reporters. “Those are the kind of games as a team you want to win and we didn’t do that.”

Houston has won four in a row, all by double digits, and blew away a Nets team that had held its previous eight opponents under 100 points, the longest streak in the NBA this season.

The Nets consistently lost Houston’s shooters on the perimeter, and the Rockets easily surpassed their NBA-best average of 11.8 3-pointers per game.

They already had 17 points before Garnett became angry after he was called for a foul against Howard with 7:53 left in the first quarter. The players lightly shoved each other before Garnett threw the ball into Howard’s back, and as the players went face-to-face, Garnett rammed his head into the area near Howard’s mouth.

Howard responded with his right hand, and even after the players were separated, Garnett tried to get at Howard again before being escorted toward the locker room.

“In the good old days that was a play-on, now they throw people out,” Rockets coach Kevin McHale said. “I don’t think it was that big of a deal.”

Howard received only a technical foul, with Nets coach Lionel Hollins saying officials told him it didn’t look like Howard threw a punch. If the NBA decides otherwise after a review, he could be suspended Wednesday when the Rockets return to Orlando, his longtime NBA home.

The Rockets broke a tie atop the Southwest Division with the Memphis Grizzlies, whom the Nets host on Wednesday as Hollins faces his former team.