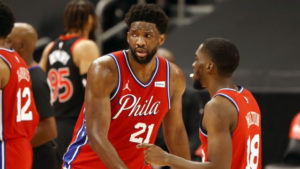 The Philadelphia 76ers had a tough night in Tampa on Sunday as they fell to the Toronto Raptors 110-103 on a night where they just could not buy a bucket. They shot just 38.3% from the floor and then 11-for-37 from deep in the loss.

Superstar big man Joel Embiid felt the pressure from the Raptors all night long as he did finish with 25 points, but he shot just 6-for-20 on the night. It was a night where he got a lot of good looks, but they just did not drop.

“I just missed shots that I usually make,” said a somber Embiid. “As soon as I cross half court, they send two or three guys on me and the whole night, I made the right play. I shared the ball, I passed it to my teammates. We could have made more shots, a lot of shots were in and out. There’s a lot of shots that I’ve been making all season that I just missed. So we just gotta do a better job.”

After scoring a career-high 50 points in their win over the Chicago Bulls on Friday, the big fella just could not buy a bucket. It was really one of those nights and he even expressed that to coach Doc Rivers.

“I thought in the third quarter, as he said walking off, ‘man I had good looks tonight, the ball just wouldn’t go in’ and there’s nights like that,” said Rivers. “I thought a lot of our guys had great looks tonight. The problem is they weren’t going in and I thought, the misses started mounting up as far as how we were handling them so we got to do a better job of handling misses because that’s going to happen and again.”

It was not just Embiid either. The Sixers received a lot of good looks from guys who normally knock down shots such as Tobias Harris, for example. He shot just 6-for-17 on the night and he was only 1-for-9 from deep. The ball was moving on the offensive end and Embiid was making the right plays out of the double teams, just shots were not falling.

“Yeah, unfortunately, it was,” said Harris. “For us, we got really good looks and we got to give them credit, they were able to make a lot of looks which made us get into the halfcourt instead of getting out and running. We had good shots that we could make, they just really didn’t fall for us tonight.”

Ben Simmons did return to the lineup and he had offensive success scoring 28 points on 9-for-11 shooting, but even he acknowledged that things could have been better on the offensive end.

“I think we all got a lot of great looks on offense that just didn’t fall,” he explained. “If they fall, it would’ve been a completely different game, but that’s the way the game works.”

Basketball is a make or miss game and on Sunday, they just missed shots. They now must move on to Tuesday’s rematch with the Raptors.