Joel Embiid accomplished something never seen before in Sixers history 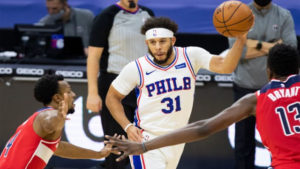 The Philadelphia 76ers made quick work of the Houston Rockets on Wednesday 135-115 as they were able to sweep their 3-game road trip to extend their winning streak to six games. It was another big effort by their team as a whole as they continue to prepare for the playoffs.

It was also another big performance for their superstar big man, Joel Embiid. Despite playing only 24 minutes and 38 seconds, the big fella went for 34 points and 12 rebounds as he took advantage of the fact that the Rockets did not have a real matchup for him. Houston turned to Kelly Olynyk to guard Embiid and that turned out to be futile for the Rockets.

In the process, Embiid became the only player in Sixers history to go for 30+ points and 10+ rebounds in 25 minutes or less.

The Sixers now have six games left on the schedule and they will get set to take on the New Orleans Pelicans on Friday back at home.