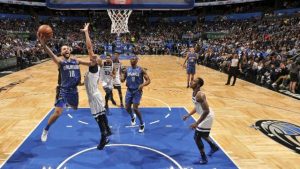 It’s not often that you can find a positive after losing to one of the worst teams in the league. Minnesota Timberwolves guard Jimmy Butler did.

“We need to humble our damn selves,” Butler told reporters after the Timberwolves fell to the Orlando Magic 108-102 on Tuesday night. “I’m glad we lost. Came in here on our high horse, thinking we’re a really good team, and we haven’t done anything yet. Good for us, man.”

The Timberwolves had won 12 of their past 15 games, including their past five by an average of 18.8 points, to move into fourth in the Western Conference standings.

“They played better than us,” Butler said of the Magic. “They played harder than we did. They did everything right. We didn’t play the way we were supposed to and they whipped our butts. I’m happy.”

“I think we were comfortable,” said Butler, who scored 28 points and had seven rebounds. “We didn’t do what we were supposed to. We didn’t play hard. We didn’t rebound. We didn’t guard. We didn’t execute. We didn’t do anything. We were going through the motions out there. Do that in this league and you can get beat by anybody.”

Butler wasn’t only pointing the finger at his team. He also was critical of his own performance as the man he was tasked to defend for most of the game — Orlando’s Evan Fournier — scored a career-high 32 points.

“He whipped my butt,” Butler said. “I’ll take that. That’s cool. It happens to the best of us sometimes. I got another [game] coming up. I’ll be all right.”