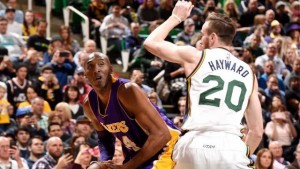 SALT LAKE CITY — Rodney Hood scored 30 points and the Jazz turned Kobe Bryant’s last visit to Utah into the worst loss of his career with a 123-75 victory on Monday night that matched the Lakers’ largest defeat in franchise history.

The Jazz had their biggest offensive night of the season and remained in the No. 7 slot in the Western Conference playoff race, one game ahead of the Houston Rockets.

Hood and the Jazz put the game away early in the first quarter with a 17-2 start. The second-year guard was 5 for 5 from the field for 14 first-quarter points. He had 30 at halftime, including eight 3-pointers, and didn’t score a single basket in the second half to miss his career high by two points.

Shelvin Mack and Trevor Booker added 17 apiece as the Jazz shot 51.7 percent from the field.

Lou Williams was the lone Laker with any offensive success and finished with 16 points. The Los Angeles starters combined to shoot 12 for 51 from the field.

Lakers: Nick Young did not travel with the team due to a stomach issue. … Have lost four straight and 8 of 9.

Jazz: Alec Burks missed his 46th consecutive game due to a broken fibula. Coach Quin Snyder said he’s better than last week, but not ready yet. … Rudy Gobert had a season-high 19 rebounds.

Bryant was honored with a pregame tribute on the video board. He played 28 minutes and finished with five points, two assists and one steal. The Jazz will play the Lakers in the season finale in Los Angeles on April 13. Snyder said he wishes another team was playing that game. “There is certainly an unbelievable amount of respect,” Snyder said. “That’s a tough game with a lot of emotion and everything surrounding that game, so it is what it is.”

The Jazz honored former player Andrei Kirilenko before the game. Kirilenko played 10 seasons with the Jazz and was an All-Star in 2004. The versatile forward said the toughest players he had to guard were Vince Carter, Bryant and Kevin Durant. “I’ve been happy to play against Michael Jordan when he was finishing and then for the next 10 years it was Kobe,” Kirilenko said. “He was the player of those 10 years, which was my best years. … Right now his era is kind of going down and LeBron took over probably like 5-6 years ago. Right now Stephen Curry is blossoming. It’s always a great transition in the NBA. One star going down and another one shining.”

Lakers coach Byron Scott said he doesn’t know if any of team’s young trio of Julius Randle, Jordon Clarkson and D’Angelo Russell can grow into a franchise player. “When you look at our young corps, I don’t look at none of those guys being that next Kobe anyway,” Scott said. “I think they can be a piece of it or a part of it, but not to get to that level that he’s gotten to. And if there is one that can do that, it’s going to take a whole hell of a lot of work to get there. A lot of dedication to get to that pinnacle as far as basketball’s concerned.”