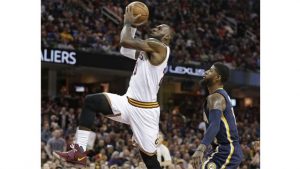 Win one more at Indiana, the four-time MVP will be crowned king of the first round.

James scored 41 points while padding his postseason resume with yet another triple-double, leading defending champion Cleveland back from a 25-point halftime deficit to a 119-114 victory over the Pacers on Thursday night.

“We knew we had to take (some) punches, but it was a flurry, more than we expected,” James said. “At halftime, I was just looking at the guys and telling them `Let’s get a couple stops.”

Officially, it will go down as the third-largest comeback in playoff history. But the largest halftime deficit overcome previously was 21 points, by Baltimore against Philadelphia in 1948.

As for James, he keeps moving up in the record books, too.

He scored 28 in the second half and finished with 13 rebounds and 12 assists, moving past Kobe Bryant and into third on the NBA’s playoff scoring list. Bryant had 5,640 points; James now has 5,669.

Cleveland has won 11 straight first-round games since James returned to his hometown team.

And this time, Kevin Love and Kyrie Irvin got a firsthand glimpse of James’ mastery as they watched the entire fourth quarter from the bench.

Of course, none of that matters to James right now. All he wants to do is chase a fourth title.

“I just try to put myself in position to help my teammates win — no matter who’s on the floor with me,” James said. “I just don’t settle for being not as great as I can be. The only thing that matters is (winning) — that’s what I’m here for.”

Paul George did everything he could to get Indiana back in the series. He scored 36 points, grabbed a playoff career-high 15 rebounds and finishing with nine assists, one short of his second postseason triple-double. He even held James in check in the first half.

And it still wasn’t enough.

Now the Pacers are one loss away from being eliminated by James’ team for the fourth time in six years.

“Early on in the third (quarter), I saw it getting out of hand. I trust the guys on that floor, but I just thought — you know, I watched it kind of unravel — that’s when I should have stepped in and demanded the ball a little bit more,” he said.

After trailing 74-49 at halftime, James helped spur a rally that cut the deficit to 77-62. Indiana extended the lead to 20 on back-to-back 3-pointers from Jeff Teague and Lance Stephenson, and then it was all Cavs.

Cleveland finally tied the score at 98 and took its first lead since the first quarter when James scored on a dunk with 6:27 to go. The teams traded leads on each of the next four baskets, but after George’s 3 with 5:15 to go gave Indiana a 104-103 lead, James scored on a layup that started a 12-5 run to seal it.

“We just never quit,” coach Tyronn Lue said. “We knew the importance of this game. To go up 3-0, makes things a lot more difficult for those guys.”

Cavaliers: Irving, Love, J.R. Smith, Channing Frye all scored 13 points. … Cleveland has won six straight over Indiana. … After scoring 49 points in the first half, the Cavs scored 35 in each of the final two quarters. … Kyle Korver scored more points in two quarters (six) than he did in the first two games (four). He finished with 12.

Pacers: Jeff Teague finished with 15 points and seven assists. Lance Stephenson had 13 points. … George had 23 points, nine rebounds and five assists in the first half. … Indiana scored 37 points in the first quarter, falling just short of a season high (39), then matched that 37 in the second quarter for its highest first-half total of the season.

Indiana has only been down 3-0 in one other seven-game series since it joined the NBA. The Pacers have never endured a four-game sweep in the NBA.

And it didn’t have to happen.

“I thought we came out kind of passive,” coach Nate McMillan said. “You knew they were going to be more aggressive.”

On Sunday, Indiana will try to stave off elimination when it hosts Cleveland for Game 4.