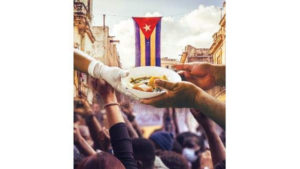 A 22-year-old Jamaican native who has been studying medicine in Camagüey, Cuba for the past three years, has found himself in a frenzy in recent times.

It follows a shortage of food and medicine across the Spanish-speaking island, and what citizens have described as a weak response by the government’s to the resurgent COVID-19 pandemic.

The situation was compounded last week when thousands of frustrated citizens flooded the streets of the capital city, Havana, as part of the largest protest in a generation against the economic turmoil, the government and the ruling Communist Party.

The Jamaican man who requested anonymity told the Jamaica Observer that the rare protests, in which one individual has reportedly died, is distressful.

“It doesn’t look like it will end anytime soon. The Cubans really have had enough. Thank goodness I’m very mentally fit, cause if not, I would have given up being here. But we are all having a hard time in Cuba right now. Every week I see myself losing weight, probably from stress and the fact that there’s no transportation for the longest while and I have to walk everywhere I go,” he said last Tuesday.

The unrest began with a demonstration in San Antonio de los Baños, a city which is south-west of Havana, and eventually spread throughout the country. As officers and soldiers donned in riot gear patrolled the streets with over 100 citizens arrested, tension mounted across the country.

“My internet time is limited,” the student continued. “The government has cut off Internet access here. I have to be using a VPN (Virtual Private Network) to bypass all that. In terms of mood, honestly to me, the place feels like a deserted island. The whole vibe of the place just dead. I can’t go anywhere. There is a food shortage and there’s absolutely nothing here to do. I don’t even know how to explain properly. You have to live it for yourself to understand.”

An internet blackout was ordered by the Cuban government after the protests began last Sunday, with several social media applications blocked, leaving the island disconnected. However, it was reported that access began returning for several citizens on Wednesday.

Moreover, the medical student who said he avoided the protest and remained indoors, told the Sunday Observer that schooling continues amid the chaos.

“Online classes don’t exist here. The foreigners studying here, we are continuing our medical studies. But we have to walk really far to get to the hospital where we receive our lectures and such. Schools are cancelled but not for us medical foreign students. I’m going to be honest; I haven’t left the school campus for days for probably a month or so,” he said.

“And the protest, it’s basically in the whole island. Security forces haven’t been around the area I’m in. People have been complaining for the longest while, but it’s just since Sunday I think that it became this really serious protest.”

To make matters worse, he has run out of food.

“I have no food supplies. I have to buy food every day and the food is very expensive here. People have no idea and I have my food delivered. I have to be buying rice with chicken with a little sauce on it and it comes with some ground provision. That costs around US $2, but in Cuba that’s a lot. Before January of this month, it used to cost less than a dollar.”

While Cuba has been grappling with food and medicine shortages throughout the pandemic, they have also been tussling with inflation since the beginning of 2021. According to Trading Economics global macro models, the inflation rate in Cuba is expected to reach 2.90 per cent by the end of 2021 and 4.80 per cent by 2023. In comparison, for June 2021, the All Jamaica Consumer Price Index (CPI) was 109.8, indicating an inflation rate of 0.7 per cent, according to the Statistcal Institute of Jamaica.

“And it’s the same thing every day for lunch and dinner. I buy that food from a nearby house. I stopped buying food from restaurants because their prices skyrocketed this year and I can’t afford to buy from them as often as I used to before this year,” he continued.

But President Miguel Díaz-Canel has pointed a finger towards the United States, blaming the country and its economic sanctions for the issues rattling Cuba today. US sanctions have restricted trade with Cuba since 1962. Further, they were tightened under former US President Donald Trump, who also imposed sanctions on Venezuela, Cuba’s main supplier of oil.

Meanwhile, on Thursday, US President Joe Biden described Cuba as a “failed state” and called communism a “failed system.”

And up until about Thursday, communication with his family both in Cuba and here in Jamaica was diminished.

“I can’t even connect with them because there’s no Internet. But the last time I spoke with them, which was Sunday I think, they seemed fine. I haven’t heard ever since then. They’re like an hour’s drive away. But it’s almost impossible to visit them cause of the transportation situation,” he said Tuesday.

“We have to mostly use mobile data. The Internet isn’t working at all for any of us. We have to use a VPN and connect to Wi-Fi, because using the VPN doesn’t work with mobile data. So we can only access the net if we are near a Wi-Fi spot and have a VPN. I do it without hiding. The VPN is free on the app store… Most of us use it freely. We’re not doing anything wrong. We are just trying to communicate with our families and trying to be aware of what’s going on.”

Locally, Cubans residing in Jamaica also took to the streets on July 13 to demonstrate in support of Cuban protesters, outside the Cuban Embassy in St Andrew.

Back in 2018, speaking at the United Nations General Assembly in New York, Prime Minister Andrew Holness called for the US to lift the sanctions against Cuba. Holness contended that embargoes and other economic barriers must not become tools to prevent people and the citizens of the Republic of Cuba, from attaining their right to development.