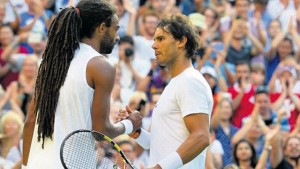 It was the 29-year-old’s first ever defeat to a qualifier at a Grand Slam and came in the aftermath of losing his French Open crown where he had been champion nine times.

The loss followed his 2012 second-round exit to world 100 Lukas Rosol, a first round beating by the 135-ranked Steve Darcis in 2013 and last year’s fourth-round defeat to Nick Kyrgios, who was at 144.

Down at his lowest ranking for a decade — at 10 in the world — yesterday’s defeat was yet another symptom of the great Spaniard’s game being in a terminal state of decline.

For Brown, who once drove to tournaments in a camper van to save money and is of German and Jamaican descent, it was his second win against Nadal, having won on grass in Halle in 2014.

It also gave him a third-round clash against Serbia’s Viktor Troicki.

“I had actually never been on Centre Court before,” said Brown.

“They asked me before the match if I wanted to go on the court. I didn’t know what was going to happen, so I just said I’ll just go on when I play.

“I thought I would freak out a little bit but I don’t know if it was the match in Halle, it felt very familiar. It wasn’t obviously that big of a court but being on grass, being with him on the court and having won the last match it made me feel more comfortable.”

He added: “It’s easy for me to play my game against someone like him because I have nothing to lose.”

Nadal had the luxury of the first break for a 3-1 advantage in the opening set which was quickly cancelled out by Brown in the fifth game.

Brown, gambling his chances on serve and volley, broke in the 12th game to take the set.

Normal service was resumed in the second set with the 14-time major winner breaking in the third and ninth games to level the contest.

But Brown was far from disheartened, continuing to attack at every opportunity, and he gained the crucial break in the fifth game of the third set against an increasingly bamboozled and error-plagued Nadal.

Sensing victory was there for the taking, the 30-year-old Brown broke in the first game of the fourth set courtesy of a wild, mis-hit Nadal backhand which sailed wide.

Nadal saved two match points in the ninth game, but Brown sealed a memorable victory on his 13th ace.