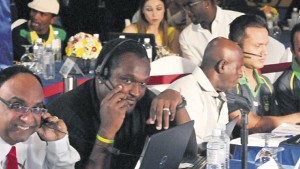 JAMAICA Tallawahs, the champions of the inaugural Caribbean Premier League (CPL) Twenty20 tournament staged in 2013, have secured the services of left-arm swing bowler Krishmar Santokie for the third edition of the regional showpiece.

The CPL player draft, held yesterday at the Terra Nova Hotel in Kingston, was open to media access and was also streamed live on television. The player value for the draft ranged from US$150,000 down to $5,000.

The 30-year-old Jamaican Santokie, a successful player for Guyana Amazon Warriors for the first two seasons of the CPL, was second on the wicket-taking list last campaign, while accounting for 17 victims.

The Tallawahs drafted Santokie in the ninth round for $15,000.

Legendary Sri Lanka batsman Mahela Jayawardene, 37, was one of the international players picked by the Tallawahs. The experienced Jayawardene, highly regarded for his silky stroke play and ability to score quickly, has notched two centuries in T20 cricket. He was picked in Round Three for $100,000.

The others are big-hitting all-rounder Andre Russell, wily fast bowler Jerome Taylor and wicketkeeper Chadwick Walton, who is also a quick-scoring top-order batsman.

In the draft, a minimum of four players picked for each franchise must be registered to that entity’s local cricket board for the home territory.

While franchises could acquire up to a maximum of four international players as part of their squad, they were not forced to.

Jamaica Tallawahs, who lost at the semi-final stage last season, won the 2013 CPL T20 after beating Guyana Amazon Warriors in the grand final.

Barbados Tridents are the defending champions after winning the tournament last year.