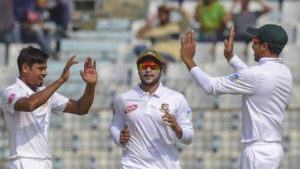 CHITTAGONG, Bangladesh (CMC) — A mesmerising display of spin bowling from Taijul Islam sent the West Indies crashing to an embarrassing 64-run defeat inside three days in the opening Test of their two-match series at the Zahur Ahmed Chowdhury Stadium here yesterday.

After Devendra Bishoo had captured four wickets to help dismiss Bangladesh for a paltry 125 in their second innings and leave the Windies a target of 204 for victory, Islam claimed his seventh five-wicket haul in Tests to almost single-handedly destroy the visitors’ middle order, as they were skittled out for 139 on the stroke of tea.

It was the Windies’ first ever loss in Bangladesh and the first in seven Tests overall.

The loss was also the West Indies’ third straight to occur inside of three days of a Test, dating back to the two losses in the recently concluded Indian tour.

Resuming the day on 55 for five -an overall lead of 133 runs — the home side managed to add 70 valuable runs thanks mainly to a fighting knock of 31 from lower order batsman Mahmudullah.

After Mushfiqur Rahim had been bowled by fast-bowler Shannon Gabriel for 19 to leave Bangladesh 69 for six, Mahmudullah and Mehidy Miraz put on a much needed 37 runs for the seventh wicket.

But Bishoo claimed the next three wickets in quick succession to give the momentum back to the Windies. He began by having Miraz caught behind by wicketkeeper Shane Dowrich for a well played 18, and then he had both Nayeem Hasan (5) and Mahmudullah caught by Shai Hope as Bangladesh faltered to 123 for nine.

Offspinner Roston Chase then wrapped up the innings by dismissing Islam for one.

Bishoo ended with figures of 4 for 26, while Chase took three for 18 and Jomel Warrican two for 43.

However, in pursuit of a reachable target, the West Indies got off to a nightmare start losing four wickets inside the first six overs.

Bangladesh skipper Shakib Al Hasan drew first blood when he tempted Kieran Powell to run down the pitch to a flighted delivery, allowing wicketkeeper Mushfiqur Rahim to effect an easy stumping to make the score five for one.

Six runs later Shai Hope edged a delivery from Hasan behind to the ‘keeper’ to be out for three, and without another run being added, Islam accounted for the wickets of Windies’ Captain Kraigg Brathwaite for eight and Roston Chase for a four-ball duck, both out leg before wicket playing back to flat arm balls, as the West Indies slumped to 11 for four at the lunch break.

For the second time in the match, Shimron Hetmyer countered with aggression, blasting Al Hasan for two fours and six in the first full over after lunch.

That aggression proved to be his downfall, however, as in trying to hit Mehidy Miraz out of the ground he picked out Nayeem Hasan on the long off boundary to be out for a cameo 27 from 19 balls.

Shane Dowrich, who scored an unbeaten half-century in the first innings became Islam’s third wicket when he was trapped on the back foot and was out leg before wicket despite using a review to leave the score 51 for six.

Bishoo was then brilliantly bowled by Islam for two with a delivery that drifted away but then turned back sharply between his bat and pad.

Islam then picked up his fifth wicket after deceiving Kemar Roach with a straight delivery that on-field umpire Richard Illingworth had initially given not out. However, a review showed the ball hitting into the stumps and the decision was overturned.

The lone resistance from the West Indies came in the form of Sunil Ambris and Warrican who tried desperately to resuscitate the innings during a 63-run stand for the ninth wicket.

Their partnership prevented the Windies from being bowled out for under 100 for the first time in an away Test since 2000 and gave slight hope of a remarkable comeback victory.

Just when it looked like the two were on course for a significant partnership, Mehidy struck to dismiss Warrican, who top-edged a drive where Al Hasan took a good catch running back from midwicket, as Bangladesh eased closer to victory at 138 for nine.

Warrican scored 41 from 55 balls laced with three boundaries and one six.

Islam then duly finished off the match by having Ambris caught behind for 43, although replays showed there was no edge when the ball went past the bat.

Islam finished with figures of six wickets for 33 runs while Al Hasan and Miraz each took two wickets.