Is The Mainstream Igniting Pedophilia With ‘Victoria Secret’-Style Lingerie Show Featuring 5yo Girls? 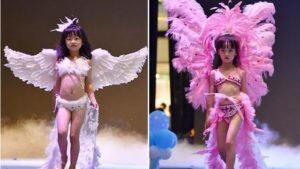 Pedophilia is a hot topic in the last several years, and it becomes a huge problem in politics, government, and Hollywood.

Political philosopher Noam Chomsky, author of Manufacturing Consent: The Political Economy of Mass Media, seed the U.S. corporate mainstream media as the most sophisticated propaganda operation in the history of humankind, working to reshape our perceptions and values.

People are becoming worried about the extent to which we sexualize young girls, as there is a fine line between shows like the Victoria’s Secret–style show in China a few years ago in which 5-year-old girls dressed in lingerie walked down the runway, and pushing the envelope to further see children as sex symbols.

According to FreeThoughtProject, the latest movement within media and Hollywood pop culture goes towards accepting the sexualization of children and pedophilia as a normalized behavior.

The fashion show that took place in a shopping mall in China, revealed shocking images of young girls wearing nothing but lingerie, costume wings, and headpieces.

FreeThoughtProject previously reported on the constant drive within pop culture to normalize pedophilia. It claims that some sects of society know no limits as to how far they will go to force acceptance to avoid offending others.

In one extreme case of forcing such political correctness, Salon magazine, a leftist news outlet, implies that society must be accepting of pedophiles, and refers to pedophilia as an ‘alternate sexual preference’, so we should embrace these differences on the grounds that this poor man is just misunderstood.

Moreover, the video and article published deal with ‘non-offending’ pedophiles or individuals who are sexually attracted to prepubescent children but claim to have never acted on it. Yet, the subject of one Salon article, Todd Nickerson admitted to seeking out jobs as a babysitter and noted that he “fell in love” with a five-year-old whom he babysat.”

Elijah Wood and Corey Feldman have spoken out loud about Hollywood being a den of pedophilia, and powerful moguls and Hollywood stars prey on the vulnerable like “vultures.”

Plus, the New York Times published an op-ed proclaiming that pedophilia is “not a crime, but a disorder these people [pedophiles] are living with.”

The article also points out another misconception, claiming that pedophilia is not a choice. It claims that recent research suggests that the disorder may have neurological origins, and pedophilia could result from a failure in the brain to identify which environmental stimuli should provoke a sexual response.

This portrays rapists and people who fantasize about exploiting or raping children as victims living with a condition that they have little choice over.

Readers are additionally misled by claims like “Men with pedophilia are three times more likely to be left-handed or ambidextrous, a finding that strongly suggests a neurological cause.”

The idea behind this all is that these people should not be subjected to moral evaluation, but should be treated with compassion. Seeing pedophilia as a “condition,” rather than an internal mental process involving desires and attitudes, leaves the pedophile blameless.

Furthermore, when the public heard about the Kevin Spacey story, the mainstream media was again trying to normalize pedophilia by creating a halo effect and making it appear that child molestation is okay because he is gay. The media focused on Spacey’s sexuality rather than the attempted rape accusation lobbied against him.

In 2011, blogger Jack Minor wrote that using the same tactics used by gay rights activists, pedophiles have begun to seek similar status arguing their desire for children is a sexual orientation no different than heterosexual or homosexuals, and psychiatrists started advocating to redefine pedophilia in the same way homosexuality was redefined several years ago.

Interestingly, the CEO of the New York Times, Mark Thompson, was involved in the cover-up of cases involving British child rapist Jimmy Saville, who raped about 500 children during his career, while being protected by media moguls and celebrities alike.

Additionally, when recent news broke of a massive pedophile ring being busted in Norway, many mainstream outlets, including The Washington Post, ABC News, and the New York Times, deleted published reports on it.

Last year, TFTP reported the attempt to normalize pedophilia as a mainstream “sexual orientation.” The move involved pedophiles rebranding themselves as “Minor Attracted Persons,” hoping they will be accepted as part of the LGBT community.

The disturbing fact is that it was somewhat effective as multiple outlets reported it as acceptable, and this normalization appears to be spreading.

There are two main avenues to legalizing adult sexual relations with pre-pubescent children, both on track by pedophilia advocates, especially in the mass media and in academia: to designate it as a sexual orientation; and to lower—or abolish—the age of consent for sexual activity.

Therefore, we are left with no other choice but to stop accommodating political correctness and terminate the momentum of this pedophilia project in its tracks, and protect children and childhood together.