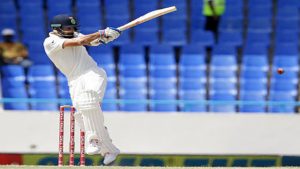 Indian captain Virat Kohli reached a maiden Test double-century as he continued to plunder the West Indies bowlers with the tourists reaching lunch at 404 for four on the second day of the first Test at the Sir Vivian Richards Stadium in Antigua on Friday.

He reached the milestone just before the interval and resumes in the afternoon session on exactly 200 in a fifth-wicket partnership with Ravichandran Ashwin (64 not out) that has so far produced 168 runs and all but played a dispirited-looking home team out of the game at such an early stage of the scheduled five-day contest.However the West Indies were their own worst enemies in the morning session as Ashwin should have fallen to Shannon Gabriel when on 43 but Shane Dowrich, controversially selected to replace the experienced Denesh Ramdin as wicketkeeper for this match, grassed a straightforward chance.

That error only compounded the Caribbean team’s woes as their bowlers, with the notable exception of Gabriel, were made to look pedestrian especially by the excellence of Kohli’s batting on a pitch that has almost nothing by way of encouragement in pace and bounce.

Notwithstanding the difficulties for strokeplaying batsmen on this surface as well, the Indian skipper’s almost complete dominance of the bowlers continued through the morning as he relentlessly marched his side forward with 102 runs added in the two hours’ play from the already comfortable overnight position of 302 for four.

In six hours at the crease so far, he has faced 281 deliveries, striking 24 boundaries. Apart from the personal milestone, Kohli is the first Indian captain to score a Test double-century away from home. He continued to enjoy the excellent support of Ashwin, a gritty, determined battler who has made the most of that generous slice of luck to reach a seventh Test half-century.

He will be eyeing the prospect of a third Test century at the expense of the West Indies, who will also have to consider the damage he may be able to wreak with his varieties of spin later on in the match.