In light of Philadelphia’s destruction of Minnesota, maybe Jimmy Butler was right about young Timberwolves 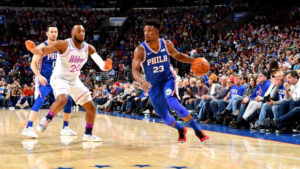 PHILADELPHIA — 76ers swingman Jimmy Butler called for a towel Tuesday night following some unexpected perspiration, because it occurred under the unforgiving heat coming from the lights and cameras in the media room instead of on the court while dispatching his latest former team.

In a game that was supposed to feature some animosity and bad blood between Butler’s Philadelphia 76ers and the franchise he torched on the way out the door, the Minnesota Timberwolves packed their Purple Rain jerseys but left their pride somewhere in Minneapolis. They should’ve been looking forward to this game since the day Butler was mercifully moved from Minnesota to Philadelphia, but they looked as if they’d rather be anywhere else than competing against their old teammate.

The 149-107 final was a laugher from soup to nuts, all the way down to Joel Embiid going to Instagram to mock the Timberwolves being bullied by Butler in that infamous practice a few months ago. On that day, Butler took a group of third-stringers to victory in a scrimmage, reportedly locking down Karl-Anthony Towns in the post without help.

“It was like a regular Chicago practice,” Timberwolves forward Taj Gibson, also Butler’s teammate in Chicago, told Yahoo Sports about that day. “In Chicago, we competed and challenged each other all the time. It was all love. He was trying to get guys better. I didn’t look at it any other way.”

On Tuesday night, he did it in front of 20,000 fans and was switched onto Towns on a few occasions — although this time he didn’t storm off the floor barking, “You need me!” as he did during that fateful practice.

But no one would’ve blamed him if he did, as the lifeless Timberwolves didn’t put up much of a fight in a game that saw them give up 83 points in the first half. To make matters worse, it wasn’t even Butler leading the charge. He was content to let the game come to him, scoring 19 points on just 10 field goal attempts in 28 easy minutes, watching Embiid dominate Towns and Ben Simmons come close to yet another triple-double.

Many on the Minnesota side believed it was a litmus test of sorts, to see if Butler would bring out the best in a team no longer burdened by expectations it couldn’t handle.

The Timberwolves failed and perhaps indirectly proved Butler right — that the franchise wasn’t serious about winning, that it bet on the wrong stars instead of him. The Timberwolves felt the intensity of the 76ers, but had no plans of matching it. Some of the players were quietly disappointed the headliners didn’t rise to the occasion.

The usually intense Butler was so nonchalant, it bordered on dismissive.

“It was everything that I thought it would be,” he said. “Seeing some old faces. Not too much trash talking though, I don’t think anybody’s talking like that.”

At his core, Butler is the ultimate truth serum. Whether you believe he made the Timberwolves better or worse is up for debate, but no one can deny his ability to hone in on flaws and point them out as he sees them.

He was branded a bully for his perceived treatment of Towns and to a lesser extent Andrew Wiggins, and his quiet-turned-loud trade demand started conversations about his willingness to fit into a team construct.

Butler doesn’t have to be in charge, but he’d better respect whoever is or a Molotov cocktail will be headed in that direction. It proved that way with the Chicago Bulls and the Timberwolves and soon enough, the 76ers’ flaws will either be fixed or exposed even, as Butler still appears to be in observation mode.

His methods are often up for interpretation, but the content is usually undeniable — hence this weird place he appears to be in his new situation, where he’s doing more deferring than dominating, perhaps by design.

Butler is still finding his way with Philadelphia, a team that still needs reinforcements on the wings and perhaps another big inside before it can be complete enough to truly compete with Milwaukee, Toronto and perhaps Boston.

And even though he’s faced his share of mini-dramas in his early days, he can look across the way and see his suspicions were rooted in truth, that his pairing with the Timberwolves was not a marriage meant to last, but a fling that produced a little fun and not much else.

He had hugs for new Minnesota coach Ryan Saunders and daps and photos with former mates Derrick Rose and Jeff Teague. He had empathy for former teammate Tyus Jones, who suffered a leg injury in the third quarter and had to be carried off, tapping Jones on the head with a word of encouragement before Jones left the floor.

And that was about it for Butler, who proved his point without having to do much.