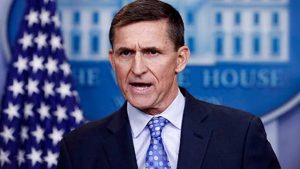 WASHINGTON — The sentencing for former national security adviser Michael T. Flynn, scheduled for Tuesday morning, was unexpectedly postponed after a federal judge said Flynn’s conduct left him with “disgust,” and indicated he was considering a prison sentence — even though prosecutors had recommended no jail time for the retired three-star general.

Flynn’s admitted crime of lying to the FBI while occupying a top post in the Trump administration, and his acceptance of a six-figure lobbying contract from a foreign government while serving as a national security adviser to Trump during the campaign “undermines everything this flag stands for,” Judge Emmet Sullivan lectured the defendant in a blunt tirade that startled the packed courtroom.

“Arguably, you sold your country out,” the judge said. “I cannot assure you if we proceed today you will not receive a sentence of incarceration. I cannot hide my disgust, my disdain for this criminal offense.”

Flynn had pleaded guilty to one count of making a false statement to the FBI regarding his conversations with Russian ambassador Sergey Kislyak during the transition. Sullivan pressed him on whether he knew he was lying at the time, and understood that it was a crime. Flynn said he did.

Sullivan later walked back one portion of his comments, acknowledging that he had wrongly accused Flynn of working as an unregistered agent of the government of Turkey while serving in the White House. In fact, Flynn had ended his work for Turkey before he joined the White House staff, although he has admitted filing false information about hundreds of thousands of dollars in funds he received from Turkey during the 2016 campaign, claiming his client was a foreign businessman rather than the government in Ankara itself.

Sullivan’s dressing-down of Flynn — who memorably shouted, “Lock her up!” about Hillary Clinton during the 2016 Republican convention — seemed to catch his lawyers, his family members in the courtroom and even prosecutors from special counsel Robert Mueller’s office by surprise.

Mueller’s team had cited Flynn’s extensive cooperation with the investigation in calling for leniency from the judge. Exactly what Flynn disclosed is not public, and he has not been called to testify in open court. Sullivan pressed prosecutors on whether Flynn’s cooperation was completed, and noted it is “rare” to sentence a defendant before that point, inviting Flynn’s team to reconsider their agreement to be sentenced right now.

After a 30-minute break, Flynn’s chief lawyer, Robert Kelner, told Sullivan, “We are prepared to take Your Honor up on his suggestion so [Flynn] can eke out the last measure of his cooperation” in another case unrelated to Mueller’s investigation. That involves the indictment of two businessmen, unsealed by federal prosecutors in Virginia on Monday, for lobbying for Turkey in 2016 without registering with the Justice Department — a case for which Flynn is potentially a key witness as an unindicted co-conspirator and which could take months, if not longer, to litigate. Sullivan scheduled a status conference on the matter for March, but the actual sentencing will now likely be put off much longer than that.

For all the harsh condemnation of the conduct of the president’s former national security adviser, the proceedings today offered a glimmer of hope for the White House and its allies that the Mueller probe may be nearing its end.

Mueller’s prosecutors, in a sentencing memo two weeks ago, had praised Flynn’s cooperation in several federal probes, including providing “first-hand information” about contacts between the Trump transition team and the Kremlin — an issue that is at the core of the Russia probe.

But when Sullivan pressed one of Mueller’s prosecutors, Brandon Lang Van Grack, about whether Flynn had more assistance to provide the Russia probe, the prosecutor at first hesitated and then replied that the defendant had already given “the vast majority of the cooperation that could be considered.”

Kelner, Flynn’s lawyer, later emphasized the point, saying that Flynn “has held nothing back” from Mueller’s prosecutors, but that his assistance to the special counsel was “very largely completed at this point.” If true, that would suggest that Mueller does not plan to use Flynn, one of his most important cooperating witnesses, to provide testimony in criminal charges against other figures in the Russia probe, which could signify that the criminal investigation is nearing its conclusion.

Mueller could, however, use testimony by Flynn in a final report about his investigation, which he is required to write, although it’s unclear how much of it, if any, will be made public.

Flynn had originally pleaded guilty last December to one count of making a false statement to the FBI — a crime that carries a maximum of five years in federal prison — when he was interviewed by two agents in his White House office on Jan. 24, 2017, about two conversations he held with Kislyak during the transition, after President Barack Obama imposed sanctions on Russia to punish the Kremlin for its interference in the 2016 election. Flynn denied to the agents that he had asked Kislyak not to retaliate. In a followup interview two days later, he denied recalling a second conversation in which Kislyak told him that Russia had decided to honor Flynn’s request.

In a statement of offense filed at the time, Flynn also admitted that he had lied to the agents about separate conversations he had with Kislyak urging Russia to oppose a United Nations Security Council resolution condemning Israeli settlements on the West Bank. He also admitted filing “materially false” statements with the Justice Department about his lobbying work for Turkey, including omitting the role the Turkish government played in directing an op-ed he published in a Capitol Hill newspaper on Election Day calling for the extradition from the United States of an opponent of Turkish President Recep Tayyip Erdoğan.

In the days before Tuesday’s scheduled sentencing, the issues before Sullivan were clouded when Flynn’s lawyers filed a memo saying that, at the suggestion of then Deputy FBI Director Andrew McCabe, Flynn had met with the FBI agents without being represented by a White House lawyer. Flynn’s defenders in the conservative media, led by the Wall Street Journal editorial page, insinuated that the bureau was trying to entrap him into lying. But Flynn and his lawyers put that issue to rest when Sullivan grilled them about it. Asked directly if he continued to “accept responsibility” for his “false statements,” Flynn answered forthrightly: “I do, Your Honor.” When Flynn asked Kelner if he believes “Mr. Flynn was entrapped by the FBI,” the lawyer replied: “No, Your Honor.”