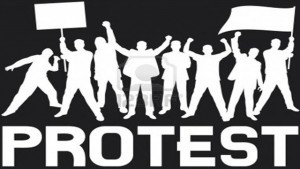 The owner of a St John’s Store, Kooti, whose alleged racist comments led to outrage and protest, Saturday, said he was misunderstood.

They Syrian-born businessman who did not want to be named, said the backlash came as a shock to him and his family.

“I would like to apologize to the public for the unfortunate misinterpretation of what happened. It had nothing to do with race but it was an argument between two people.”

Over 50 people rallied in front of the store on lower High and Thames streets on Saturday morning in an action dubbed “Colour the Town Black.”

The incident started when Cleon Athill, tried to get a refund for a pair of shoes she bought at the store.

According to Athill, the proprietor refused to return her money and an argument ensued in which the storeowner allegedly used racially charged language.

But the storeowner said the incident was a misunderstanding made worse by a language barrier.

“I am not racist and would never ever mean to say any words with that intention. I would never utter any racist words, being myself discriminated against in Syria because we are Christians.

“I have to say that the both of us were angry, and my English does not help me say everything I want to,” he explained with the help of his bother-in-law, who translated.

The store owner claimed that the incident escalated after Athill refused the standing store policy on the return of goods.