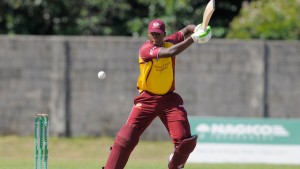 Left-arm spinner Akeal Hosein produced a superb spell, claiming a career-best four for eight from his 10-overs as the Under-19s, sent in at the Vivian Richards Cricket Stadium, were bundled out for a dismal 78 off 45 overs.

Jahmar Hamilton then stroked an unbeaten 42 and opener Montcin Hodge, 31 not out, to guide Hurricanes to their fifth win in six outings in the competition.

They top Group A on 24 points, 11 clear of second placed Trinidad and Tobago Red Force, who were taking on Windward Islands Volcanoes in the day’s second game.

With just one win to their credit in the tournament, the Under-19s were hoping to transform their fortunes but instead found themselves tottering on 48 for eight in the 35th over.

West Indies speedster Alzarri Joseph caused the havoc up front, removing opener Shian Brathwaite for three and wicketkeeper Emmanuel Stewart for four, to end with figures of two for 20 off his 10 overs.

Hosein then ran through the middle order with the only resistance coming from Kirstan Kallicharan who top-scored with 33.

He struck two fours and two sixes in a 95-ball knock and added 30 for the ninth wicket with TeShawn Alleyne (6).

Kallicharan was ninth out, one of two wickets to fall to left-arm spinner Jason Campbell, as the innings ended swiftly.

In reply, Hurricanes stuttered and stumbled to 10 for two as Jermaine Otto (1) and Jamaican Nkrumah Bonner (0) departed cheaply.

But Hamilton and Hodge restored normalcy to the innings, posting 72 in an unbroken third wicket stand, to see Hurricanes home without any further hiccups.