How Simona Halep Beat Serena Williams for the Wimbledon Title 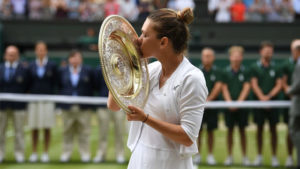 WIMBLEDON, England — It was late in the first set of Serena Williams’s latest Grand Slam letdown when a British fan seated high in Centre Court, perhaps worried about getting full value for the price of his ticket, yelled, “Serena, wake up!”

“I definitely wasn’t asleep,” she said.

But there was no changing the one-way flow of the Wimbledon women’s singles final against Simona Halep, who was playing as if in a dream.

Halep went on to a 6-2, 6-2 victory on Saturday, managing the moment brilliantly to become the first Romanian to win a singles title at Wimbledon, the oldest of the four Grand Slam tournaments.

“I’m very sure that was the best match of my life,” said Halep, a former No. 1 and French Open champion.

Williams finished with 26 unforced errors. Halep, astonishingly, finished with just three, and not because she was routinely shying away from risk.

“I always have been intimidated a little bit when I faced Serena,” said Halep, who had won only one of her previous 10 matches against Williams. “She’s an inspiration for everyone and the model for everyone. Today I decided before the match that I’m going to focus on myself and on the final of a Grand Slam, not on her. That’s why I was able to play my best, to be relaxed and to be able to be positive and confident against her.”

That is certainly an easier mental challenge to conquer at this stage. Several years ago, Saturday’s result would have sent a major tremor through tennis.

Williams is a seven-time Wimbledon singles champion and one of the most dominant figures that this mind game of a sport has seen, with her blend of power, court coverage and mental toughness.

But the dynamic has changed now, perhaps for good.

Williams is undoubtedly the best player of this era and one of the greatest of all time, but at age 37, she is no longer a reliable closer, something Halep said gave her confidence.

Saturday’s defeat was Williams’s third straight in a major final. All of them have come in straight sets in the past year as she has tried and failed to tie Margaret Court’s record of 24 major singles titles.

She has played infrequently this season, largely because of left knee pain, and been unable to win a title of any kind since she returned to the circuit in March 2018. That was six months after she gave birth to her daughter, Olympia Ohanian, and experienced post-delivery complications that she has said were life-threatening.

“I feel like I’m still incredibly competitive or else I wouldn’t really be out here, per se,” Williams said. “For the most part, I feel like I’m on the right track.”

There are, of course, different ways to look at Williams’s series of convincing Grand Slam defeats. It is no doubt remarkable that she continues to reach major finals considering how infrequently she competes in regular tour events. It is no doubt impressive that she can still impose her game and will at this late stage of her career.

At 37, with her next birthday in September, she was the oldest women’s singles finalist at a Grand Slam tournament in the Open era.

“I don’t know what is harder — playing after having a child or playing deep into your 30s,” said Martina Navratilova, the 18-time Grand Slam singles champion, who reached her last Wimbledon final in 1994 when she was 37, losing to Conchita Martinez.

Just being out there with a championship at stake is a major achievement with all that Williams has been through. But she also has been unable to manage her nerves and control her shots when she needs to most.

Halep was the portrait of focus and positive energy on Saturday, just as Angelique Kerber, another gifted counterpuncher and defender, was in last year’s Wimbledon final, when she dominated Williams, 6-3, 6-3, making just five unforced errors.

But that score line, like this year’s, was also a reflection of Williams’s shaky performance. After firing 19 aces in her reassuring semifinal rout of Barbora Strycova on Thursday, Williams hit just two aces against Halep, both in the second set after the final already was tilting heavily in Halep’s favor.

Instead of truly testing Halep’s nerves — not typically the strength of her game — Williams allowed her to build a serious head of steam and belief. Halep won the first four games in just 12 minutes.

Yes, Halep served uncommonly well and reached shots and serves that other women whom Williams played at the All England Club were unable to reach. But Williams also surrendered point after key point with quick errors: some on the run or stretch but plenty more from positions of genuine strength.

She went for too much and, more rarely, too little. She was again too tightly wound with Court’s record in reach.

Halep was once resistant to the charms of grass-court tennis, preferring the sport’s slower, higher-bouncing surfaces. She said there are no grass courts in her Romania.

But in this year’s tournament, with the victories piling up, including a sparkling third-round defeat of the former No. 1 Victoria Azarenka, she declared that her attitude had changed.

Her mother, Tania, has long hoped she would succeed at Wimbledon. “When I was about 10 she said if I want to do something in tennis I have to play the final of Wimbledon in front of the royal box,” Halep said.

Halep, 27, did better that. She won, sinking to her knees on the grass after match point, and now has two major singles titles after losing her first three Grand Slam finals.

She was deflated when she did not defend her French Open title last month, losing in the quarterfinals with the draw opening up. But the defeat also played a role in her Wimbledon success.

“Something clicked after losing at the French Open,” said Virginia Ruzici, Halep’s longtime manager, who won the 1978 French Open. “It was like something woke up inside her, the ambition.”

Halep received a series of Wimbledon pep talks from her adviser Ion Tiriac, a former player who has become one of the wealthiest men in Romania and who long managed tennis stars like Ilie Nastase, Guillermo Vilas and Boris Becker.

“Everyone did not expect she could win, but I thought she had a good chance if she could make Serena move from the first point,” Tiriac said. “If you don’t and you give Serena the chance to hit the ball from a solid base, she will hurt you.”

Halep, who is coached by Daniel Dobre, also consulted her former coach Darren Cahill, who helped her rise to No. 1 before he took a break from coaching this season.

“I talk with him all the time,” Halep said. “His heart is with us. It made me a little stronger today, honestly, to be able to believe that I have the chance to win.”

Halep’s previous victory over Williams came in round-robin play at the 2014 WTA Finals in Singapore when she won, 6-0, 6-2. It was one of the most lopsided defeats of Williams’s career, but Williams roared back to defeat her, 6-3, 6-0, in the final of that same event. Their recent duels have been much closer, including Williams’s three-set victory in the round of 16 at this year’s Australian Open.

But as at Wimbledon last year, Williams was unable to raise her level quickly when she faced a well-established leading player in the final after navigating a relatively weak draw.

“Today, I just went for it like in Singapore: I had that image in my head,” Halep said of her 2014 victory. “I really believed there is the chance to do the same thing. I knew I have to stay there every ball, otherwise when she comes back, she’s very powerful.”

But there would be no comeback, and in the final stages of the match, Williams seemed more resigned than ferocious.

Halep converted four of five break points against Williams’s normally fearsome serve. She also did what she and her coaching team knew she needed to do: put a lot of first serves into play (76 percent) to keep Williams from attacking Halep’s vulnerable second serve too often.

“I definitely knew that she was just playing her heart out,” Williams said. “I felt like, ‘O.K., what do I need to do to get to that level?’ ”

Williams never did find a way to match her inspired opponent’s A game.

There is not the slightest dishonor in that, but it has happened too often in the last year on the game’s biggest stages for it to be a coincidence.