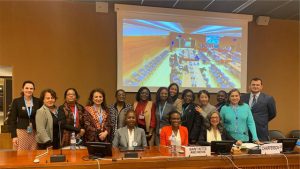 Junior Minister and Minister responsible for Social Development and Gender Affairs, the Honourable Isalean Phillip at the 83rd Session for the Committee on the Elimination of Discrimination Against Women (CEDAW) being held in Geneva, Switzerland.

So! After two days of thorough interrogating questions from the UN Committee on the Elimination of Discrimination Against Women (CEDAW), I is tyad! 😓 BUT I’m pleased to report that this CEDAW reporting session concluded with the Committee being impressed and feeling confident in our federation’s ability to move the women and girls empowerment agenda forward!

Constructive criticism and valuable recommendations were made for us to take immediate action on addressing gender-based violence, mainstreaming gender in plans for poverty alleviation, climate change adaptation and disaster management, reforming and amending legislation for equitable access and benefits to women and children, and implementing temporary special measures to nurture women’s economic empowerment, particularly in agriculture.

There‘s a lot to be done, no doubts, but single steps every day make great leaps over time. Watch this space…change has already begun. Grateful for the support from staff and management from Gender Affairs who supported me through this process.

Featured in the photo are the CEDAW Chair and members of the country evaluation task force.