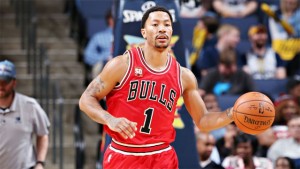 The Knicks acquired Derrick Rose from the Bulls on Wednesday, hoping the former NBA MVP can be their answer at point guard. New York traded center Robin Lopez, guard Jose Calderon and guard Jerian Grant to Chicago, which shipped guard Justin Holiday, Rose and a 2017 second-round pick back to the Knicks.

A Chicago native, Rose was drafted by the Bulls with the No. 1 overall pick out of Memphis in 2008. A source close to Rose said he was very emotional about leaving Chicago because of all his great memories there but that he wanted the big stage of New York.

Once Rose got word the Bulls were looking to trade him, the source said, he hoped it would be to the Knicks. “His first choice was New York,” the source said. “He wants the spotlight.” Bulls chairman Jerry Reinsdorf called the trade a “hard one” to make.

“Everyone knows him as the local kid who became MVP for his hometown team, but not everyone got to know him like I did,” Reinsdorf said in a statement. “While he is a terrific basketball player, he is an even better person with a tremendous heart.”

ESPN reported last week that the Knicks had internal discussions recently about trading for Rose. Both Knicks coach Jeff Hornacek and general manager Steve Mills had said that the team was interested in upgrading its point-guard position in the offseason.

Rose has battled injuries since he was named NBA MVP in the 2010-11 season. However, he did show improvement in 2016, averaging 17.7 points (including 8.4 in the paint), 45.3 percent shooting from the field and 55.3 percent shooting on drives to the basket during the new year. That should help the Knicks, whose starting point guards averaged a league-low 7.6 points per game in 2015-16 and shot just 44.7 percent on drives to the hoop.

“This is an exciting day for New York and our fans,” Hornacek said in a statement. “Derrick is one of the top point guards in the NBA who is playoff-battle-tested. He adds a whole new dynamic to our roster and immediately elevates our backcourt.”

Rose, 27, is owed $21.3 million in the final year of his contract. He will be a free agent after the 2016-17 season. A six-year veteran, Rose seemed like the perfect fit for Chicago after it drafted him.

He led the Bulls to the top of the Eastern Conference in the 2010-11 regular season, leading the franchise to success it hadn’t enjoyed since the Michael Jordan era. But he wrecked his knee for the first time in the playoffs the following year, and since then, he hasn’t had the speed that once made him one of the league’s most dazzling young stars and a seemingly perennial All-Star.

But he did play in 66 games last season, his most in five years, and averaged 16.4 points. A source said Knicks star Carmelo Anthony reached out to Rose’s camp in the days leading up to the trade but the sides were unable to connect. Former Bulls teammate Jimmy Butler thanked Rose in an Instagram post.

Grant was selected 19th overall out of Notre Dame in the 2015 NBA draft. He played in 76 games as a rookie, averaging 5.6 points and 2.3 assists, which ranked eighth among first-year players.

The Knicks will need to replace Lopez this offseason, and some members of the organization would like to target Bulls center Joakim Noah, sources say. Noah is close with Rose and also has a good relationship with Anthony.

Another potential option for New York is free-agent center Dwight Howard. The Knicks are one of several teams that Howard would consider in free agency, league sources say, but their interest in Howard is unclear at this point.

The club will have at least $30 million to spend in free agency. Bulls general manager Gar Forman said the club was eager to add Lopez, who he said adds “toughness” to Chicago’s roster.

“As we said at the end of last season, we are committed to exploring every option to improve this team,” Forman said. “This trade is a significant step in that process. Our goal is to get younger and more athletic, and this trade moves us in that direction and allows us to start changing the structure of our team. In Robin Lopez, we are acquiring a starting center who is a good defender, good rebounder, and brings a toughness to our team.

Jose Calderon is a proven veteran who can run an offense and knock down threes. Jerian Grant was high on our draft board last year as someone with a great skill set and positional size. All three players are great teammates and have tremendous work ethic, and we are excited to welcome them to the Chicago Bulls organization.”