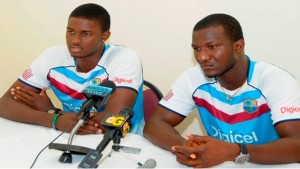 NAPIER, New Zealand (CMC) — Skipper Jason Holder has dismissed reports of a rift in the West Indies team as he led his side to a six wicket victory over United Arab Emirates and a quarter-final berth in the ICC Cricket World Cup 2015.

Holder appeared to be involved in an on-field argument with former captain Darren Sammy during their must-win final Pool B match against the United Arab Emirates in Napier.

Sammy was brought on to try to break what turned out to be a century partnership between Nasir Aziz and Amjad Javed and was not happy when taken out of the attack after just one over that yielded four runs.

Sammy and Holder appeared to have strong words which Holder later played down as “a little banter on the field” saying they wanted to have some fun but “unfortunately it probably didn’t look that way.”

He later conceded they “had a little tussle there. It’s just part of the game. At the end of the day we shake hands and still smile together.”

Sammy later posted a picture on Instagram of him enjoying a beer with Holder in the locker room.

Holder has rejected talk of problems and said the two-time champions were looking forward to a quarter-final against unbeaten New Zealand in Wellington on March 21.

“I couldn’t ask for anything more from the guys,” he said.

“It was a must-win game and we had to win by a big margin and the way the guys came out and played cricket I can’t ask for much more.”