Home / National / Hodge to PM Harris: Am I Superintendent Of Prisons Or Not?

Hodge to PM Harris: Am I Superintendent Of Prisons Or Not? 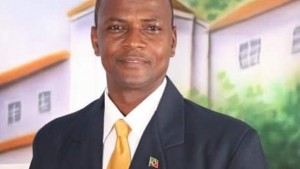 Junie Hodge is calling on the Minister of National Security, Prime Minister Dr. Timothy Harris to state definitively what Hodge’s status is as it relates to his post as Superintendent of Prisons and why his situation remains in limbo for more than a year now.

In a statement issued Monday, Hodge, who is fighting his December 2017 dismissal from the post, said in a recent sitting of the National Assembly, the Prime Minister failed to adequately address a question raised about his status and legal case.

Hodge was appointed Superintendent of Prisons in February 2016, and less than two years into his tenure was abruptly sent on vacation leave in October 2017 amid rumor that he would be terminated. That was confirmed in December 2017 when he was told by Permanent Secretary in the Ministry of National Security Osmond Petty not to return to the prison when his vacation came to an end.

The Superintendent took legal action against the government challenging the dismissal, and Freedom FM has confirmed with the aggrieved party that although the matter has not yet officially gone before the court, it is very much live.

In his statement, Hodge says during his tenure he acted at all times professionally and in the best interests of the prison system and those who served with him, however, allegations of misconduct were made against him without formal charges first laid for him to respond to.

Mr. Hodge said his attorneys wrote to his employers advising that various disciplinary rules had not been followed with regard the move to terminate him.

“It was only after my attorneys wrote to correct this breach of the rules that formal charges were actually laid against me in June 2018 more than 7 months after allegations against me were first raised. It must be noted that there was an internal investigation conducted by the Police Strategic Intelligence Unit (PSIU) between October and November 2017 and submitted to the National Security Advisor. While the National Security Advisor held without evidence that I was “a threat to the security of the prison and the Federation” the Intelligence Unit held that this view was unfounded and was only the personal view held by some officers “with no support for their claim.”

Mr. Hodge maintains that the allegations against him are baseless and unfounded and since July 2018 has called for a disciplinary hearing to make a determination on the charges.

The Public Service Commission has yet to convene a hearing.

Mr. Hodge states “since these charges were laid the government and specifically the ministry of national security has failed to address this matter so that the cloud of doubt continues over my head and continues to place my reputation and integrity into question.”

Prime Minister Harris in January 2019 named Assistant Commissioner of Police Terrence James as Head of the penal system but did not give a date when that appointment would be made official. He also recently had passed in the National Assembly an amendment to the Prison Act changing the name of the post from Superintendent of Prisons to Commissioner of Corrections.

Meanwhile, since January 2019 the Prime Minister’s brother Mr. Denzil “Bull” Harris has been the acting Superintendent of Prisons after the two most senior prison officials were sent on leave with instructions to proceed to retirement once their leave would have ended.