Home / Regional / Haiti plunges on with poll despite opposition boycott 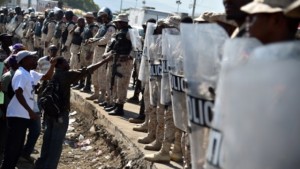 Haitian police stand in front of the Haitian Parliament, in Port-au-Prince, on January 11, 2016, during a protest against the first session of the Parliament.

Michel Martelly, who is constitutionally barred from seeking re-election himself, dismissed opposition demands that he postpone Sunday’s presidential run-off.

“We’re fully ready,” the former popular singer-turned-president insisted. “From the point of view of the state, we have a responsibility to organize elections.”

His decision will reassure Haiti’s main foreign sponsor, the United States, which this week said the government had already made “numerous concessions” to opposition concerns.

But it could trigger rage on the streets. The opposition candidate will boycott a vote he has branded a “farce” and his supporters are mobilizing for protests.
In October’s first round cote Martelly’s chosen successor Jovenel Moise was credited with 32.76 percent of the vote over opposition flag-bearer Jude Celestin’s 25.29.

But many polling stations remained closed due to unrest or electoral skulduggery and voter turnout was tiny.

The government allowed a hastily assembled independent commission to review the ballots, but the opposition has not been mollified and protests have erupted.

“On the 24th, it’s ‘No’,” Celestin told AFP this week. “I won’t take part in this farce, it will be a selection not an election because there will only be one candidate.”

On Monday and Tuesday, thousands of opposition protesters descended onto the streets of Port-au-Prince, a capital still scarred by a 2010 earthquake that left 200,000 dead.

Despite being criticized by the new independent electoral commission formed after October vote, the official CEP electoral body plans to go ahead with Sunday’s vote.

But an umbrella body of outside poll observers declared in a statement that they would not take part in the planned poll “that the CEP wants to pass off as an election.”

On Tuesday, observers from the Organization of American States, expressed “concern on the current political impasse ahead of Sunday’s second round of elections.”

“The mission urges all Haitian political players to engage in dialogue and negotiations to find a meaningful solution to this impasse,” the poll observation mission said.

But for his part, Martelly did not appear in the mood for dialogue and negotiation, denouncing instead a “vast plot to try to destabilize us.”

He accused the opposition of trying to run out the clock to undermine the legitimacy of the planned handover of power on February 7 between Martelly and his successor.

“They want to take power their way, because they can’t take it through the ballot,” he alleged, in a radio address.

In the same broadcast, Haiti’s prime minister — former opposition figure Evans Paul — also denounced the protests and said the election was the only way out of the crisis.

“There are two projects: The first is the vote on the 24th, the other project is chaos,” he warned.

Since 1986, when president-for-life Jean-Claude “Baby Doc” Duvalier fled a revolt, the poorest country in the Americas has struggled repeatedly to hold credible elections.

To political chaos and gang violence has been added the fury of nature, with first the earthquake and then a cholera epidemic ravaging the population.

Sunday’s vote appears unlikely to mark the start of a new chapter in the long-suffering Caribbean republic.

Demonstrators at this week’s street protests chanted: “Ready your weapons, there will be no election on Sunday.”

Another protest is planned for Friday.