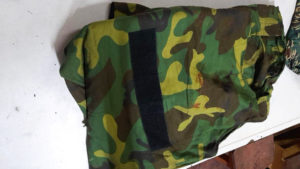 The Guyana Police Force has made a major breakthrough into a spate of robberies which occurred between August 20 and August 23.

According to a release from the Force, acting on information received, a party of police ranks conducted a cordon and search exercise at Kuru Kururu Village Soesdyke/Linden Highway and several houses were searched for suspects involved in the robberies.

At the home of one of the suspects, one Guyana Defence Force (GDF) camouflage shirt was found in a haversack and when asked he claimed he got it from a relative.

The suspect was also ID’d as one of the perpetrators who committed the robbery on Fordyce which occurred at Hillfoot, Soesdyke on August 22.

He subsequently led the ranks to the home of a 26-year-old labourer also of Kuru Kururu, who was found hiding in a suitcase under his parents’ bed.

A search was conducted on the said premises and one camouflage bulletproof vest containing an armoured plate was found in his bedroom.

Based on the description given to the police, the 26-year-old labourer is suspected to be the perpetrator who hired the driver of a motor car, a Green Ice taxi, from Georgetown to Soesdyke and then robbed him.

He is also suspected to be the accomplice in Tenesha Fordyce’s robbery at Hillfoot Soesdyke.