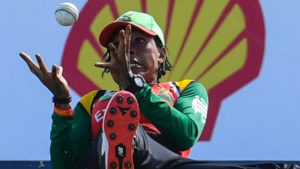 The Guyana Amazon Warriors took a big step towards the finals of the Women’s 6IXTY when they beat the Barbados Royals in the third game of the tournament on Wednesday in St Kitts.

Both teams chalked up wins against the Trinbago Knight Riders before their clash in the third game of a triple-header at Warner Park.

The Royals beat TKR by 28 runs before the Amazon Warriors got past Anisa Mohammed’s team by 15 runs.

However, it was the Amazon Warriors that started on the front foot against the Royals after Hayley Matthews opted to bat first at Basseterre.

Only Chloe Tryon, who hit 63 against the Knight Riders, got 24 off 17 balls for the Barbados franchise.

The Royals started the defense of their total of 58 well with Afy Fletcher running out Chamari Athapaththu for 1.

However, Amazon Warriors skipper Stafanie Taylor (33 not out) and Rashada Williams put on a magnificent unbroken 57-run partnership for the second wicket to take the win.

The Amazon Warriors are unbeaten with two wins in two games and lead the pack going into the second day of the tournament on Thursday.

The Knight Riders are up against the Royals from 3 pm on Thursday in a game that Anisa Mohammed’s team must win to keep alive their chances of a place in the finals.

The Men’s 6IXTY tournament begins on Thursday with three games at Warner Park.

The Guyana Amazon Warriors face the St Lucia Kings in the opening match of the men’s tournament at 10 am.

St Kitts and Nevis Patriots face the Jamaica Tallawahs at 12:30 pm, before the Trinbago Knight Riders face the Barbados Royals at 5:30 pm.