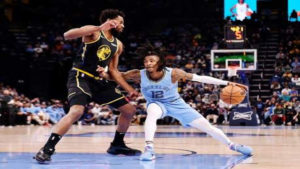 Morant seized control in the late stages of the fourth quarter, scoring five points in the final minute as the third-place Grizzlies closed the gap on the second-place Warriors in the Western Conference standings.

The Grizzlies are now within 2 1/2 games of the Warriors after having been eight games back on November 29.

Ziaire Williams and Tyus Jones had 17 points each for Memphis in front of a crowd of 17,800 at FedExForum arena.

Jones keyed a fourth-quarter rally that put the Grizzlies ahead for good. He connected on all five of his three-point attempts.

Morant, the 2020 rookie of the year, is just a week removed from a sprained knee that sidelined him for 12 games.