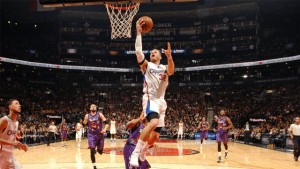 Griffin will be re-evaluated in three weeks, which means he’ll miss at least nine games while he recovers. The Clippers caught a break in that the NBA All-Star break is next week.

A usual recovery time for such an injury is often 4-6 weeks but could be less time or more, depending on how the athlete responds and how severe of an infection.

Griffin missed Sunday’s game against Oklahoma City in which the Thunder routed the Clippers, 131-108. When the team arrived in Oklahoma City, Griffin was taken directly to the hospital, where it was determined he had the staph infection. He returned to Los Angeles for the surgery.

During that game, Glen “Big Baby” Davis left the game with back spasms and had to be helped off the court. Today, however, Davis could play against the Mavericks, and J.J. Redick, who also was out with back spasms, could return as well.

The Clippers are playing four games in five days, and after today’s game at Dallas, they return home for a game Wednesday against Houston. They are 2-5 on this eight-game roadtrip.

Griffin is the Clippers’ leading scorer with 22.5 points, 7.5 rebounds while shooting 50.1 percent from the field. Griffin was set to participate in this weekend’s All-Star Game as a starter and is being replaced on the roster by Portland guard Damian Lillard.

An update on Griffin’s recovery is expected in early March.