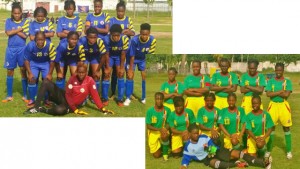 Playing on Tuesday evening at Mindoo Phillip Park in Castries, Saint Lucia, the Grenadians were coming off a 0-5 loss to Jamaica, while this was the first game for the home team in the three-team group in the CONCACAF Women’s Under-20 Tournament

Chresilda Cox opened the scoring for Saint Lucia in the 10th minute, a well taken shot after beating two defenders just inside the box. But Kristal Julien evened the score in the 17th minute, and twin strikes by Roneisha Frank in the 33rd and 38th minute put Grenada up 3-1 at halftime.

Two defensive changes for Saint Lucia helped keep Grenada at bay for most of the second half, and helped set up a stronger attack. Lyla Lionel brought Saint Lucia within one with a 78th minute strike.

With several stoppages in the second period, there was plenty of time added on. It was time enough for Saint Lucia to mount two forays into the opposition box, which could have seen the scores going level again.

Instead, late pressure from Grenada told in the final minute of play, four minutes into time added on, as Shaunasha Prevost headed past goalkeeper Sarah-Lee Dornellien, who had perhaps been Saint Lucia’s best player.

Grenada end the group with a win and a loss, and goal difference of minus three, in pole position to advance to the next round in Haiti. Saint Lucia ends the group on Thursday from 4pm, when they play Jamaica.