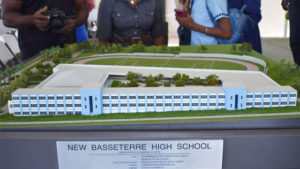 The opposition Labour party continues its strong objection to the new Basseterre High School being built on the Basseterre Valley Aquifer, an issue that was reignited following a recent town hall meeting where experts for the government reiterated that building the school on the proposed site poses no risk to the water supply.

Labour MP Konris Maynard contends that with a number of wells in the aquifer already out of commission, the government is risking contaminating the remaining sources of water for Basseterre and the surrounding areas.

“The truth is what they’re going to build on is what you call the last frontier of our aquifer. We can make a decision to just build on the aquifer but is that wise? We are now encroaching with the the proposal of the site on the last frontier. Why are we going to do that? To the east of that we can’t use those [wells], why- because they are all contaminated. So if you put the school where they are going to put it, will they now say let’s build houses to the south of that because there will be an open field. Will you build a new Labour Department to the east of the new Basseterre High School? What about to the north of it, where will you stop?

“We have to take decisions as citizens, as a generation, to say we will put down our foot and say you know what- why we don’t build on Independence Square? That’s land in the heart of town- because we took a decision that we are going to preserve the historical nature of that particular Square.

“So just think about it- in forever, not in 10 years, 50 years, 100 years, in forever, nobody has ever built where they are going to build the Basseterre High School- in forever.”

Minister of Public Works and Infrastructure Ian Patches Liburd however contends that the wells in the Ponds area where the government intends to build the facility do not supply potable or drinking water to consumers.

“[Growing up] we went to the Ponds Pasture which is the adjacent south to where we are building Ponds Pasture was pond, there was no potable water, no drinking water there. The area where we’re building the school- and there’s the Seventh Day Adventist School there, there’s no noise about the Seventh Day School, there are other buildings there- is the area in which there is what we call brackish water. As a matter of fact if you your research you will see there are two wells in the area, one next to the TDC Home and Building Depot and one right next to the Newtown Playing Field- those wells were never used for drinking water, they were used to irrigate the field [during sugar cultivation] so there was no potable, no drinking water in that area.”