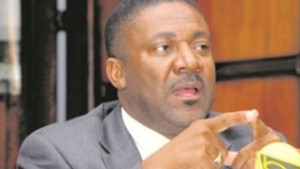 KINGSTON, Jamaica (JIS) – Canadian nutraceutical and pharmaceutical company, Timeless Herbal Care Limited (THC), which has operations in Jamaica, is the first private entity to be granted a ganja research licence by the Government.

The licence is the third to be issued, following similar awards to the University of the West Indies (UWI), and University of Technology (UTech)

The licence permits THC to cultivate ganja (marijuana) locally for research and development, in keeping with provisions outlined in the amended Dangerous Drugs Act.

This undertaking is expected to position the country to tap into the global industry, which generates an estimated US$1 billion in earnings.

The licence was formally presented by Science, Technology, Energy, and Mining Minister, Phillip Paulwell, to THC President and Chief Executive Officer, Courtney Betty, during a ceremony at the Petroleum Corporation of Jamaica (PCJ) building in New Kingston, on October 22.

In his address, Paulwell said the government, through the awarding of the licences, among other inputs, remains committed to positioning Jamaica as a global leader in medical marijuana research and development.

To this end, he encouraged THC to “move very quickly” in establishing facilities capable of conducting the level of research that will record significant outcomes.

Additionally, the Paulwell said while the ministry awaits the outcome of work being undertaken by the Cannabis Licensing Authority, “we anticipate, very soon, that the regulations will be in a position to be promulgated and that…you (THC) will move from research to commercial operations.”

Paulwell said while frequent updates are expected from the licensees, “we in the Ministry, through the National Commission on Science and Technology (NCST), and the Scientific Research Council (SRC), we (will be) monitoring…the institutions.”

In his remarks, Betty said his company is pleased to have been awarded the licence, pointing out that “we take our research and development very seriously.”

In this regard, he announced that former SRC Acting Executive Director, Hawthorne Watson, has been recruited to head THC’s local operations, adding that he will place “tremendous focus on research and development.”

Noting the significant foundations laid in the local nutraceutical and pharmaceutical industry, Betty said “we are glad to have an opportunity to play a role in developing the industry, (by) making sure we meet the proper standards (and) property control, (and by) carrying out clinical trials.”