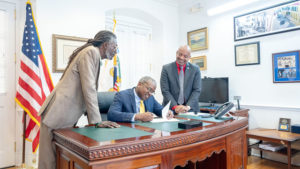 After returning to the territory from meetings with cruise industry executives, Governor Albert Bryan signed into law, Saturday, several bills including one legalizing medicinal marijuana industry in the U.S. Virgin Islands.

“I have approved the Virgin Islands Medicinal Cannabis Care Act because it is a step in the right direction toward assisting Virgin Islanders suffering from autoimmune and other debilitating medical conditions,” Mr. Bryan said. “This legislation also gives effect to a Virgin Islands community-wide referendum held in 2014 that approved the introduction of the medical-use sale of cannabis products by a majority of the voters. Since the referendum, it is clear that marijuana-use policy in the United States has been changing rapidly in favor of medicinal and recreational use and will continue, even potentially on the federal level,” the territory’s leader said.

Even as he approved the measure, however, the governor acknowledged that it will need tweaking. “The Legislature recognized that the bill, as passed, is not perfect and needs more refinement and amendment and provides for an implementation period that we must aggressively pursue,” Mr. Bryan said. “It is part of the process of implementation of the regulatory and operational system. And therefore it will be essential that further revisions be developed, with professional guidance, in the implementation process, including preparation of Regulations, forms, fees, and procedures; and to undertake necessary amendments to the Bill with the Legislature.”

The governor also took action on the following bills:

The Governor vetoed Bill No. 32-0236, which seeks to establish a new category of dental professionals called Dental Therapists to be licensed by the Board of Dental Examiners out of concern for public health and safety.

Governor Bryan also requested that the legislature act to Repeal Act No. 8150, recently enacted on January 6, 2019, which provides for the Board of Dental Examiners to include Dental Therapist within their jurisdiction since this category of skilled professional will not be defined or provided for in the Code.

”I find the concerns raised during testimony given on Bill No. 32-0236, by the testifiers, both the American Dental and the V.I. Dental Association, the V.I. Board of Dental Examiners and local Dentists to have merit and out a genuine concern for the health and safety of the public, I will veto this bill,” Governor Bryan said.

“With this Bill,” the governor added, “a Dental Therapist will be permitted to perform dental procedures with potentially life-threatening medical consequences and have the ability to perform irreversible surgical procedures, administer anesthesia and issue a prescription without the oversight of a licensed Dental professional and after just three months training.

“This Bill will encourage and foster a sound economic climate in the Territory by nurturing competition among finance lenders, protecting borrowers against unfair practices by some lenders and having due regard for the interests of legitimate and scrupulous lenders,” Governor Bryan said.

“This legislation will benefit senior citizens and lower-income families in the Virgin Islands, and enable an owner of real property to pass the property directly to a beneficiary on the owner’s death without probate through a recorded Transfer On Death deed (TOD). The approval of this Bill will assist families with avoiding or expediting the probate process which has prevented so many local families from dealing with family real property inheritance for generations.” Governor Bryan said.

The governor vetoed Bill 32-0351, the Virgin Islands Timeshare Resale Act and requested that the Legislature act on a comprehensive overhaul of the Timeshare Sales regime to include ownership rights, sales protocols, licensing and regulation of salespersons, property taxation and reporting and foreclosure.