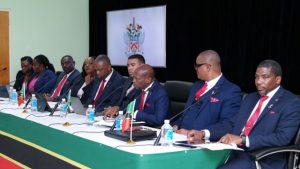 The Honourable Dr. Terrance Drew-led Government is busy at work finding innovative ways to generate economic activity that will propel St. Kitts and Nevis on the path towards becoming a sustainable island state.

Prime Minister Dr. Drew stated today (Wednesday, November 2, 2022) that his administration inherited an economy that was too heavily dependent on the Citizenship by Investment (CBI) programme.

Dr. Drew, who also serves as Minister of Finance in the Federal Cabinet, said as a result of a lack of economic diversification under the former administration, the Federation’s economy right now is approximately 50-60 percent dependent on the CBI programme.

“What does that mean, it means that we are very vulnerable. [The economic citizenship industry] is a very fragile industry. It is even more fragile than tourism as I can say here today. There was hardly any diversification in the economy. It was as if you collected money through the CBI and you just did what you wanted to do with it, and so that has put us in a very vulnerable state that we have to quickly start to work on to get out of,” Prime Minister Dr. Drew said while making an appearance on Freedom FM’s Issues radio programme.

“We are in the red, dependent heavily on CBI and therefore we now have to chart a different course in order to make sure that St. Kitts and Nevis remains strong and viable,” the Prime Minister added.

The Honourable Dr. Terrance Drew outlined that his Government’s plans for creating a sustainable island state is being spearheaded by the recently formed Economic Council and these plans will be highlighted in his administration’s first National Budget, which is expected to be delivered later this year.

“Our Budget will be focused on the sustainable island state where we will seek to resolve a number of these issues and create a foundation which is strong to propel us forward. That is why I have put an [Economic Council] together and we met even up to yesterday [November 01] with of course persons from National Bank, Social Security, Development Bank, Inland Revenue, Treasury, Ministry of Finance and we had a consultant there who represented the data that was collected from St. Kitts and Nevis and we had other persons there as well, and that meeting was chaired by the Financial Secretary and we looked at where we are in St. Kitts and Nevis. We saw that we are down in areas while we have gone up in spending, depending too much on the CBI programme,” Dr. Drew said.

Prime Minister Dr. Drew further noted that his Government is also focused on attracting viable investment projects to the Federation of St. Kitts and Nevis, and in that regard he indicated that discussions are being advanced with officials from the Africa Export-Import Bank on the possibility of establishing a fish processing facility in the Federation.