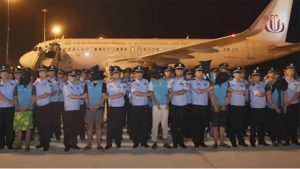 Headed by Study Committee Chairman Jim Banks (R, IND-3), Reps. Michael Waltz (R, FL-6) and Mike Gallagher (R, WI-8), the group of 21 lawmakers sent a letter to Secretary of State Antony Blinken and Attorney General Merrick Garland to demand answers on how the Chinese police were able to establish a branch in the U.S.

“We are writing to express our grave concern over reports of the law enforcement presence of the People’s Republic of China in New York City,” the letter began.

The letter further states, “The Public Security (Police) Bureau of Fuzhou, China, announced in January 2022 that it has opened the ‘first batch’ of 30 overseas police service stations in 25 cities in 21 countries. In the United States, the Fuzhou Police’s overseas service station is hosted at the American Changle Association, an overseas Chinese hometown organization in New York City.”

In a report, the New York Post uncovered that the station in Lower Manhattan is being operated by nonprofit America ChangLe Association NY Inc., a group that has been blacklisted by the IRS.