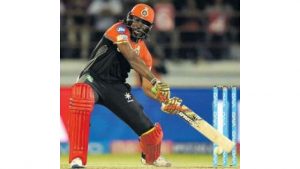 BANGALORE, India (CMC) — West Indies leg-spinner Samuel Badree made two early strikes, but they were not enough to save Royal Challengers Bangalore from a heavy seven-wicket defeat to Gujarat Lions in the Indian Premier League here yesterday.

Defending an inadequate 134 all out off their 20 overs at the M Chinnaswamy Stadium, the hosts started brightly when Trinidadian Badree removed both openers to reduce Lions to 23 for two in the fifth over.

Ishan Kishan missed a sweep at a straight delivery in the third over and was hit in front for 16 ,while danger man Brendon McCullum picked out A B de Villiers in the deep in Badree’s next over.

However, Australian Aaron Finch blasted 72 off 34 deliveries in a 92-run, third-wicket stand with Captain Suresh Raina (34 not out) which pulled the innings around.
Badree finished with two for 29 from his three overs.

Earlier, superstar opener Chris Gayle failed for the second-straight innings with a single-digit score as RCB failed to get going after being asked to bat.

The left-hander was the second to fall in the fifth over for eight, edging a defensive prod at Aussie seamer Andrew Tye to be caught behind.

Pawan Negi, batting at number seven, top-scored with 32, while Kedar Jadhav chipped in with 31, but they were the only two of the top order to pass 10.

The defeat for RCB — their sixth in eight outings — left them one from bottom of the standings and facing early elimination from the tournament.