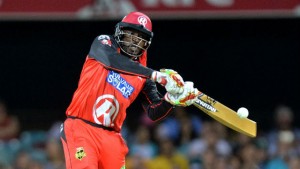 hris Gayle slams one of his seven sixes on his way to equalling the fastest ever half-century in Twento20s.

MELBOURNE, Australia (CMC) – Mercurial Chris Gayle equalled the fastest ever half-century in Twenty20s with an extraordinary knock, as he brought the curtains down on his controversial – and perhaps final – campaign in the Australia Big Bash on Monday.

With Melbourne Renegades needing to overhaul Adelaide Strikers’ 170 in order to have a chance at a semi-final spot, opener Gayle blasted a top score of 56 off 17 deliveries, but wickets fell steadily around him and the hosts came up short at 143 all out in the 16th over to lose by 27 runs.

Gayle, who will perhaps best be remembered in this tournament for his controversial ‘don’t blush baby’ remarks to Channel TEN reporter Mel McLaughlin a fortnight ago, set the stage for the run chase by racing to his fifty in record pace.

He smashed two fours and seven sixes en route as he equalled the previous record set by Indian left-hander Yuvraj Singh set nine years ago against England in Durban, during the Twenty20 World Cup.

Gayle plundered 26 runs from the first over of the innings sent down by 21-year-old rookie seamer Greg West, which cost 27 runs.

After starting with a wide, West watched as Gayle collected a couple to mid-wicket. The left-handed Jamaican blocked the second delivery but then burst to life, clearing the ropes with the remaining four deliveries of the over.